“Asish keeps asking us what has happened to him and every time we have to make something up. I can see in his eyes that he doesn’t believe me when I say that it is just a weakness, but he doesn’t say anything. One day he asked me 'Am I going to die?'. I broke into tears, I felt terrible. He is not able to bear the pain in his head and bones. His illness has bound him to the bed and there's nothing I can do about it.” - Ashok Naskar, father of Asish said.

13-year-old Asish, son of a daily-wage-laborer is battling dreadful cancer. His only chance of getting better is through urgent chemotherapy followed by radiation. The family is not in a state to afford the treatment and that is what is making them feel more hopeless.

Ashish has been diagnosed with Acute Lymphoblastic Leukemia, a form of cancer that affects the white blood cells. It occurs in the bone marrow and can quickly spread to the blood. For the past few months, Asish’s days are spent lying down on his bed waiting for his fast recovery. He tries getting up, talking to his younger sister, Rima but after a little while, he just wants to take rest.

“Everything was fine with Asish till two months ago. It all started with a terrible headache when we had to take him to a local doctor, but no one could tell us anything properly. It was only when we went to Bangalore that we got to know about Asish’s real condition. We were completely devastated and cried aloud. We couldnt believe that a small boy like him can suffer from such a terrible disease.” - Ashok said.

A diligent student in school, Asish misses his studies and his friends due to the illness

The government school to which Asish goes is quite far from his place. But even then, he never missed one day of his school. Always the first to finish his homework. Now he is not able to focus on anything. He had become so weak that he hardly talks to anyone now.

“He is in either in the hospital getting the chemotherapy or wincing in pain when he is in home. I feel horrible as I look at my son suffering and am able to do nothing at all. ” - Shyamoli.

Ashok is a daily-wage-laborer. The days on which he gets work, he brings only Rs 200-Rs 250. He has a big family to support and he is the sole breadwinner. Asish’s medical condition has left Ashok and Shyamoli helpless and distraught.

“Every morning when I leave looking for work, I hope I don’t return empty-handed. My family depends on me completely and I don't want to let them down. I know I can do nothing to save Asish, their despair just shatters me from within.” - Ashok.

13-year-old Asish is a good student with a promising future but he is battling cancer now. He has severe pain in the head and in bones. He has recurring breathing trouble. He needs immediate chemotherapy and should be followed up by radiation. The cost of the treatment is 5 lakhs and the family has only been able to arrange a minimal amount. It is only with your help that Asish can survive and live a normal life.

Your support can save Asish 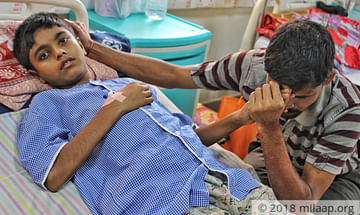 Asish needs urgent chemotherapy to survive cancer. Only you can help him.

UPI: givetonaskar@yesbankltd (Copy to clipboard)
Or
Click here to read the instructions before you make a bank transfer.