With No Income For Months, Taxi Driver Struggles To Save His Cheerful 7-Year-Old From Deadly Cancer | Milaap
loans added to your basket
Total : 0
Pay Now

SG
You are sending a message to
Santosh Gorgal
Go back

With No Income For Months, Taxi Driver Struggles To Save His Cheerful 7-Year-Old From Deadly Cancer

Shares
Shares
Share on whatsapp
For the past 7 months, Lakhan has lived in anxiety and fear because he doesn't know how to explain 'cancer' to his 7-year-old son Ashish. Due to the dreadful disease, Ashish lives an isolated life, cut off from his friends at school. He has many questions about his disease – “papa, why can’t I go to school? Why is my hair falling off? Why does everyone get shocked when they see me now?” Lakhan forces a smile and tells him that if he eats healthy food, he can soon go to school like everyone else. Ashish trusts his father more than anyone, and it’s this faith that keeps him positive and smiling. But Lakhan is helpless.


He tries to smile through the pain of cancer

'We thought it was just a small fall...'

When Ashish complained of knee pain, his parents, Lakshmi and Lakhan, just warned him to be careful while playing. The next day he started limping and could hardly walk. They took him to the hospital and to their shock he was diagnosed with cancer in his bone marrow. The months that followed have been spent in unimaginable pain. Ashish has now been through 3 cycles of gruesome chemotherapy. He is too young to understand what cancer is but he was quick to realise that he's 'sick'.


“When he realized that something was wrong, he told me ‘papa I thought only old people get sick’ but he wasn’t sad. He was curious. He tries to stay positive and smiles despite everything he’s going through. But cancer has taken over his life. He can’t play outside like he used to, he can’t eat his favourite food. Sometimes, he cries and begs us to let him go outside.” - Lakhan

Lakhan is a taxi driver who earns around Rs 200-300 per ride. It has been months since he went for work because he has to take care of his Ashish while Lakshmi takes care of their other two children. He managed all the expenses so far with the help of his friends and relatives. Lakhan worries that something might happen to Ashish during his absence, so he stays with him all the time. Despite the pain of cancer, Ashish stays positive and is looking forward to going back to school. However, he needs to continue chemotherapy to beat the disease and his father can't afford it any longer. 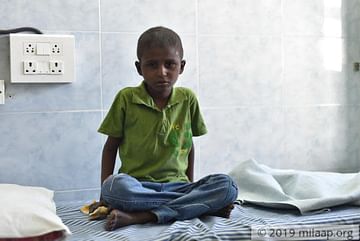 Ashish Is Battling Cancer And Needs Your Help To Continue Treatment