This 1-Year-Old Who Fought Death Once Will Succumb To His Weak Heart Without Urgent Surgery | Milaap
loans added to your basket
Total : 0
Pay Now

“Life has once again challenged me with the uncertainty of my baby’s life. My 1-year-old baby, Angshu was born prematurely in the 7th month. I hadn’t even held him in my arms and he was already struggling to live. Doctors had lost hope, but miraculously, he survived. A year later, once again, his weak heart is silently killing him. We're doing all we can to try and save him before it's too late, but our poverty is standing in the way of his recovery.” Mousumi, Angshu’s mother.

Little Angshu would get breathless within minutes of feeding, it was only making him weaker by the day

Mousumi and Ujjal have been running behind doctors since Angshu was just barely 4 months. As Angshu was born premature, his parents took extra care of him. They were scared to lose him. But life had different plans for them. When he was just 4 months old, he had a persistent fever and cold. When Mousumi took him to the doctor, the doctors doubted that his heart wasn’t fine.

“I wouldn’t have believed my fate if tests done twice didn’t have the same reports. After he was born, my baby couldn’t breastfeed and I couldn’t understand why. Whenever I tried to feed him, he would get tired in 5 minutes and would refuse to feed further. The problem with babies is that they can’t express their pain and sometimes we fail to understand what’s going on with them.”

Little Angshu has a hole in the aorta of his heart. This hole is present when the baby is in the womb which should ideally get closed after birth. For Angshu the hole has not closed and it hinders the passage of the oxygen to the blood in the lungs. As he grows, if this hole doesn’t close it will become fatal. He needs an urgent surgery to stay alive.

“My little Angshu weighs just 7.5 kgs (ideal weight is 11 kgs). If he can’t feed how will he ever grow? He has not been able to breastfeed after 6 months of age. While other new mothers in my locality happily spoke about how well their babies were growing, and reaching small milestones, I could do nothing but remain quiet. I don’t even know if my baby will stay alive after a few days. The uncertainty has taken away our sleep for months now.”

The parents who have to skip meals to feed their children, can’t afford a surgery

Mousumi and Ujjal have been going to doctors for a year now. But they haven’t been able to start Angshu’s medicines yet due to lack of money. The back and forth happened only to find a place where they don’t have to spend much. The delay for months has only made Angshu’s condition worse.

“With Rs 4000 a month, sometimes Ujjal and I have to skip meals to ensure that our kids don’t go to bed hungry. How will we manage to get such a big operation with this money? Ujjal works as a laborer in a milk factory. With Angshu’s ill health, Ujjal hasn’t been able to go to work. We have spoken to our relatives, but even they are poor and can’t help us much. Our house is the only thing if we have to sell that we will be on the roads, homeless.”

Further delay in the treatment can kill Angshu now

Ujjal and Mousumi are ready to give up everything they have. If they don’t manage the much as soon as possible, little Angshu will succumb to his heart condition. They have already delayed his treatment for a year due to lack of money. If he doesn’t get a surgery as soon as possible, he will succumb to his weak heart. His parents will lose him forever.

1-year-old Angshu has a hole in his heart. He needs a surgery soon. Little Angshu was born premature and already fought death once, now with this failing heart, the surgery is his only chance to survive. The cost required to save him now is Rs 1.8 lakhs. Without help, his helpless parents will certainly lose him this time.

Your support will help this baby breathe and feed properly. 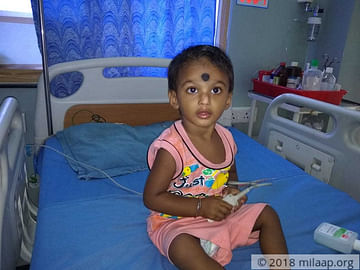 Angshu's hole in the heart is getting bigger and he can't feed or breathe. He needs help to survive.

UPI: givetoujjwal@yesbankltd (Copy to clipboard)
Or
Click here to read the instructions before you make a bank transfer.