Premature Baby Has Not Been Able To Drink Even A Drop Of Milk Due To A Hole In His Intestine, Needs Help | Milaap
loans added to your basket
Total : 0
Pay Now

k
You are sending a message to
k.kowsalya
Go back

Premature Baby Has Not Been Able To Drink Even A Drop Of Milk Due To A Hole In His Intestine, Needs Help

Shares
Shares
Share on whatsapp
Baby Abdul Khan’s tiny face is hardly visible within the glass case that has become his second womb now. Only his tummy, which has become swollen due to a deadly hole in his intestine, stands out amid the wires that run all over his tiny body. It has been 10 days since his birth, but he has not yet known the taste of his mother’s milk or any other liquid for that matter till now due to this problem. He has been surviving solely on fluids that are administered via tubes.

This little fighter cannot survive for long like this – he needs your help for an urgent surgery that can help him survive. His parents, Nasreen and Israil, can only stand at a distance and cry watching their baby boy’s plight. “The surgery that will save his life requires lakhs of rupees, but we have already spent to the best of our ability. We have nowhere to go and no one to ask for help anymore,” says Israil Khan, the baby’s helpless father.

Nasreen had been waiting 15 long years to be a mother before she learned that she was pregnant recently. After a painful miscarriage a few years ago, this was the first time she was feeling hopeful. She wanted a miracle – for herself, for her loving husband who had always been her constant solace through the highs and lows of life. She had taken every possible precaution, but unfortunately, nothing could stop the inevitable. She was rushed to the hospital in the wee hours of Sunday (6th January) after her blood pressure shot up. Her body was swollen all over and doctors had only way to save her life: to deliver the baby.


Nasreen’s baby boy was born via emergency C-section and was taken straight to the intensive care unit. All his vital organs – heart, lungs and kidney – were severely underdeveloped and he needed ventilation support for breathing. A scan revealed that there was significant damage to the intestinal tract - a hole in the intestine to be specific, due to which the baby was not able to feed. He needs a surgery to repair it urgently, without which he may even lose his life.

“I have not recovered from my complicated delivery, but I still make it a point to visit my son outside the NICU every single day. I cannot even see his face properly, but just knowing that he is holding on to life gives me hope. I cannot bear to lose my miracle baby,”- Nasreen, with tears in her eyes.

A driver who earns very less, Israil is unable to afford his son’s surgery

Israil earns a living by working as a driver, earning less than Rs 12,000 a month. He had been saving up for his wife’s delivery since last year, and was hopeful that he wouldn’t have to beg and borrow to clear medical bills. He worked day and night, and even overtime on certain days to make sure that his new baby had everything needed. But nothing went to plan – he was able to pay for his wife’s C-section but has been struggling to pay his baby’s NICU charges itself. The surgery is completely beyond his means – he has only been able to collect Rs 50,000 till now from relatives. If he does not arrange the money on time, he will not be able to save his baby boy.

Nasreen and Israil’s baby boy has not been able to drink even a drop of milk since his birth. He is struggling to survive because of a hole in his intestine that needs to be repaired via an urgent surgery. 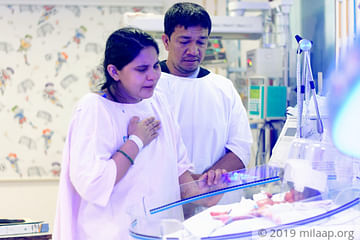 This Baby Has Not Had A Drop Of Milk Till Now

UPI: givetoisrailkhan@yesbankltd (Copy to clipboard)
Or
Click here to read the instructions before you make a bank transfer.