R
You are sending a message to
Rakesh
Go back

"Even a slight delay in medicines leads to swelling of her whole body and high fever. The doctors said that she needs a transplant to survive and I was completely heartbroken when they said I can't be a donor because of my weight. I weighed 65 kilos then, I promised to lose weight because my daughter's life depends on it. There were days when I thought my knees would give out and all I wanted to do was stop but the thought of my daughter kept me going. Now I'm 55 kilos and I'm a matching donor for my daughter but my challenge is money. I don't know how I can overcome it." -  Vythilingam, Father of 12-year-old Sugitha.

12-year-old Sugitha was born healthy and she grew normally until she turned 6. She fell sick frequently and had persistent fatigue. Her parents were terrified when her stomach and legs started swelling. Her eyes became yellowish. Doctors said that her liver is enlarged, that's bigger than normal and she would need medications to cure it. Since then medicines almost become equal to food for Sugitha. But sadly it is not enough anymore. She needs an urgent liver transplant.


"We have always made sure that she never missed any of her medicines, despite that she fell sick. She managed to go to school but missed most of the classes because of extreme tiredness. Last December she became very weak and her stomach was swollen twice her weight.  Her stools were full of blood. Medicines did not help her. Doctors said that her liver is damage completely and needs an urgent transplantation. She was in unbearable pain and we were shell-shocked."-

Her parents are determined to save her life at any cost

Sugitha's parents did not have any time for anything. They were challenged with so many odds and felt completely lost. They reside in Sri Lanka and doctors said they have to travel to India for the Liver transplant procedure because they do not have the facilities there. Their world came to a standstill. Despite all the challenges and pain they were determined to save their daughter's life at any cost.


"I cannot travel even on a local bus for few hours because I have a colostomy bag attached to the end of my large intestine. I had colostomy surgery in 2012 but I did not give a second thought traveling to India because my daughter's life is important. I can't see her going through so much pain in this age. My son is in my relative's place now. It is terrible for all of us but we are not going to give up. She deserves a life." - Neelaveni, Mother.

Sugitha's parents came to India months back thinking that the treatment would be finished in 3 months. They were disappointed when doctors said that Vythilingam cant be a donor unless he loses weight. However, he worked vigorously and lost 10kgs within a very short span of time. But they have already exhausted everything they had and now they cannot afford the lump sum money needs for transplant.


" After years of hard work we got a small piece of land and all we had is that we sold it to come to India for treatment. We sold everything we had and borrowed money from friends and relatives.  I was prepared to start everything from scratch, my focus was only to save my daughter at any cost. Now, we have a solution but I can't afford it.  She cries in pain and asks every now and then when the transplant will happen. I have no strength to even see her." -  Vythilingam.

12-year-old Sugitha has been through a lot of pain from childhood. She is waiting for the transplant because only that can save her from pain and help her live a normal life. Sadly, her parents have sold everything they had and now they cannot afford it. Her mother has colostomy bag is in unbearable pain too, but she is willing to do anything for her daughter. It would be terrible to lose their daughter because of lack of money. Her father who was working as a sales assistant has no source of income now. Only your support can save her life.

Your kind contribution can save this 12-year-old's life 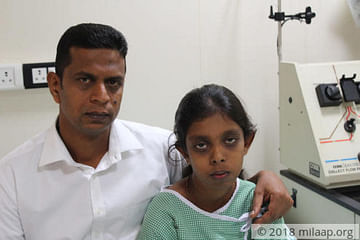 Family Has Given Up Everything To Save 12-year-old Sugitha, Yet They Cannot Afford Treatment

She needs an urgent liver transplant without which she will not survive.