You are sending a message to
Ajithan Puthenveettil
Go back

Sophia is just 30-years old. But, since last 14 years, she is struggling to lead a normal life. She has been undergoing countless cycles of dialysis.
Suffering from the past 14 years is dangerous

Sophia John is a Keralite, born and brought up in Delhi. In her childhood days, she would play with doctor set and aspired to become a surgeon in future. But destiny had something else stored for her.
She was detected with kidney failure in 2003. The then treating doctor suggested her case to be a very serious one. Since then, Sophia and her family have gone through an emotional roller coaster. She had to be treated immediately and started undergoing dialysis since then.

In 2002, Sophia suffered from frequent fever, cough, and cold also sinus issues. The family thought it to be fatigue and neglected it for some time. However, she started to develop a serious problem with her vision as well. But she was advised to wear specs and soon recovered.
“But we had no idea that these issues would come back again. Next year, Sophia had again the similar symptoms. This time we rushed to the local doctor and underwent a series of tests. When the reports came next day, my husband and I were shocked to hear this devastating news- her creatinine had increased tremendously and she was suffering from kidney failure. We did not know what to do. As a mother, when I have to see my child undergo dialysis, it is extremely painful”, says the wailing mother, Sankary.
Sophia, although wanted to go to school, she could not. She was extremely weak and felt sluggish all the time.
In 2011, things deteriorated. Her movements were minimum and could not walk anymore.
Taking care of my ailing husband and daughter was really challenging
Sankary was working as a nurse in a private hospital in Delhi. She was the one who would take care of Sophia. Even after 12 hours duty in the hospital, she managed to take her daughter on a weekly basis for dialysis.
Sophia’s father was also a patient by then. He was suffering from serious ailments like liver issues, tuberculosis, and other weaknesses.
“It wasn't easy for me to take care of both the patients at my home and also managing the duty at the hospital. However, I was determined to take care of my family. But when my husband expired in 2009, I felt I have failed as a mother, as a wife and overall as a human being. From then, I am trying to do every possible way to keep my daughter live”.
How can you help
Sophia has to undergo dialysis thrice a week. And each session of dialysis costs her almost 2000 daily. Apart from this, she needs to under multiple tests each month.
A couple of years back, her mother thought of a kidney transplant. But unfortunately, could not arrange money and neither found a matched donor. But now she does not have the courage to see her daughter undergo a kidney transplant. Sophia is her only strength.
Please help Sophia and her family to lead a normal life. 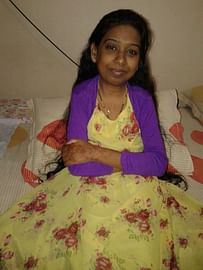 Sophia's kidneys have failed for the past 14 years and is on dialysis. Please contribute.