Shares
Shares
Share on whatsapp
It turned into a blisteringly hot Monday morning as the sun started to rise above the small village of Dhosa. The small hamlet is a ten-minute auto rickshaw ride from the Gocharan train station in the 24 South Parganas district of West Bengal. Most of the area was covered by a checkerboard of small paddy fields outlined by narrow brick pathways. I was riding on the back of a motorcycle, which is probably the most efficient way to get across the uneven brick terrain but also the least comfortable. The man driving the motorcycle was Shaymal, a loan officer for DCBS. There was a small group of men ahead of us on the path yelling out into the distance. We found out that they were a group of farmers who were yelling out for the person who owned the large van rickshaw that was stuck in the middle of the path. The owner had disappeared, and it was causing traffic problems. The men decided that they had to move the heavy rickshaw off the path themselves so other people could get through. Shaymal and I decided to help the farmers push the rickshaw off the road. Right as we had finished moving the rickshaw, the driver showed up with some petrol and thanked us all for helping him out.

A few minutes later, we reached the house of Hamida Mandal, a local woman who had been associated with DCBS for about three years. She was also a part of a women's group called "Jui" that had about 15 other members in it. Most of the other women in the group arrived as we did and took their seats on the floor of a large veranda in front of the bungalow style house. Among the women was Selima Sardar who was the leader of "Jui". She explained to me that most of the women in this group do embroidery and tailoring work on saris and other types of women's clothing to earn additional income for their families. Selima mentioned that it is burdensome to take care of her two children and aging in-laws on only her husband’s vegetable business income.

Many women like Selima have the desire to financially support their families. Small non-governmental organizations (NGOs) like DCBS have set up workshops to teach women how to use a sewing machine and do fine needle work so they can used this skill to generate an income. Shaymal mentioned to me that his branch office holds about three sessions a week where women from all over learn sewing techniques. Selima herself went through one of these courses and now does needlework for saris from the comfort of her home. "Whenever I get time for myself, I always start sewing," Selima told me as she proudly showed me a sari she had been working on for the past couple days.

She explained that since she was earning a little money, she applied for a small loan through DCBS and Milaap to receive a couple solar powered lamps. She said it was much easier to focus the solar lamp on her work, and that the light was much brighter than the old kerosene lanterns she used. She is also now able to work at night after all of the day's other chores are finished and the children are asleep. For Selma and the other women of "Jui", the solar lanterns have alleviated some of the lighting issues the women faced and allow them to keep going even when the power fails. Selima now plans to purchase her own sewing machine with the money she is earning for her needle work, and hopes to start a tailoring business soon. 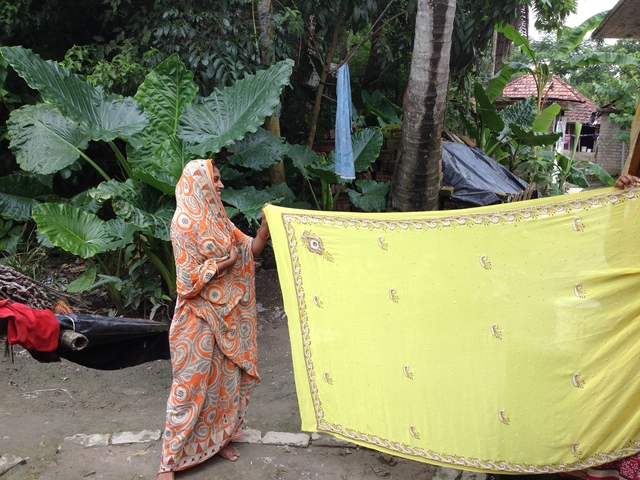 Selima shows the beautiful sari she’s been working on in her spare time, by her solar lantern