Help a daily-wage worker save his daughter's life | Milaap

Help a daily-wage worker save his daughter's life

Shares
Shares
Share on whatsapp
Sidamma is a 5-year-old who has a rare disease called Griscelli's syndrome. The disease is hurting her internal organs and without a bone-marrow transplant, she will not be able to survive the next few years.
When the doctors told Sanekappa they didn't know what was wrong with his daughter he was baffled. After three months of frequent trips to the hospital, and spending over Rs 30,000 on her treatment, Sanekappa was told there was nothing he could do.
Sanekappa comes from Mudnoor, a small village in Karnataka. He lives in a small shanty with his parents and family. When the local contractor hires him for construction projects, he travels to the site making Rs 150-200 per day.
Sanekappa with his wife Mallamma and children Sidamma (left) and Shridevi
Their two daughters, Sidamma and Shridevi(2), are left at home with his wife Mallamma and his parents. It was not a good life for the children at construction sites and their mother needed to be with them. This year, Sidamma was to join school but just before the admission process, she fell sick.
A painful start to the year
In April, a few days after Ugadi – the Karnataka New Year – Sidamma came down with a fever. She started to become very tired and complained of burning pain in her eyes, stomach and feet. Her parents took her to the local hospital in the district. At the hospital, the doctor was unable to identify what troubled Sidamma.

“We had to admit and discharge our daughter more than 20 times over the next one month. In the end, when we told them we didn't have any money left, they told us they didn't know what was wrong with her. Only that her liver and spleen were enlarged,” Sanekappa says.
Even though he felt cheated and lost Sanekappa was not one to stand by and watch his child suffer. He picked up some more jobs to save money. This time, he took her to a hospital in Gulbarga, the nearest city, 126 km away from their village.
He got her seen to by a more competent doctor who immediately saw that this was a rare disease and that the girl needed expert opinion. He referred them to Narayana Hrudayalaya, Bangalore.
The family come to Narayana Hrudayalaya, Bangalore

A diagnosis at last

In Bangalore, Sidamma was diagnosed with Griscelli's Syndrome. It is a rare, newly discovered immunodeficiency illness. Children will this disease usually do not survive their childhood unless they receive a bone-marrow transplant. For Sidamma, time is running out.
“By the time we came here, it was already the eighth month [August]. My daughter suffered for four months and because of our poverty we have not been able to get her the treatment she needs,” says Sanekappa.
Fortunately, for Sidamma, her little sister is a 100% match and will be donating stem cells to Sidamma. But the family needs to spend Rs 12 lakhs for the procedure. It is a sum that will be impossible for Sanekappa to raise.
Sidamma with her little sister Shridevi in her village

A matter of life and death for the child

Despite his never-give up attitude, Sanekappa is starting to wonder if he will be able to get Sidamma treated. “If we don't have the money, we will not be able to get Sidamma treated. The Rs 50,000 I have already spent has put me in deep debt. I don't know what we can do,” he says.
At only five, in just five months Sidamma has undergone a large battery of tests. Without a bone-marrow transplant, she may not survive beyond another 5 years. In other matters, Sidamma is lucky. Her parents love her and she was their hope for the future. She has found the perfect match for a bone-marrow transplant. If she gets better, she will go to school and get an education.
The family has exhausted all their resources and need a little help saving Sidamma. A little help from you can answer their prayers – to finally give Sidamma the treatment she desperately needs.
Click here to help save 2-year-old Sidamma's life 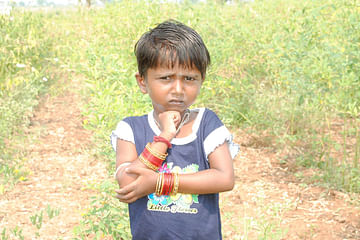 Help Sanekappa save his daughter's life. Without an urgent bone-marrow transplant, Sidamma will...