Shobanaben wants to be a skilled tailor, not just a housemaid | Milaap

Shobanaben wants to be a skilled tailor, not just a housemaid

It was Monday afternoon. I found myself in under-developed Chandkheda, a neighborhood of Ahmedabad, the fastest growing metropolitan city in Gujarat. I was here to check on the progress of Samir Mahila Mandal, and to meet their group leader Lilaben after they had borrowed a loan of Rs. 50,000 for developing their respective microenterprises. But as Lilaben was too busy with work that day, so I met Shobanaben, another group member.

Shobanaben has been working has a housemaid for quite a long time. But it was four months ago that she decided to learn tailoring from one of her relatives. She wanted to start her business of tailoring and do something on her own. As a housemaid, she earns Rs. 2000 on a monthly basis. Currently, she is still learning the intricacies of sewing.

With her loan from Milaap, she had planned to buy a sewing machine. But instead, she bought two cooking gas cylinders. On asking her further, she admitted that she wanted to use the loan for the intended purpose. But she couldn’t do so because of all the difficulty that she was going through. Every month, she had to spend Rs. 1000 to get cooking gas for her home. And this inflated bill was causing a lot of trouble in terms of meeting the other expenses. So, instead, she decided to buy her own refillable cooking gas cylinder.

“I intend to take a loan again after repaying this one, and the next time, I will definitely buy a sewing machine with it,” she said.

I am quite hopeful that Shobanaben will use her next loan for the purpose that she has stated. Because, it’s only through an extra income that she will be able to fund her daughters’ education. And continuing to send them to school is one of her priorities. 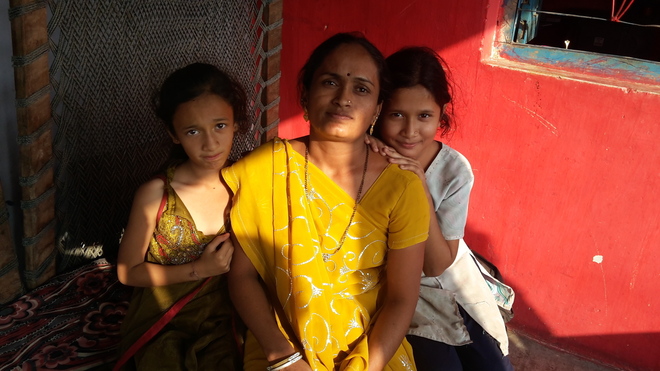 Shobanaben with her two daughters