This Wife Could Not Tell Her Husband That He Is Fighting Cancer, And She Is Struggling To Save Him All Alone | Milaap
loans added to your basket
Total : 0
Pay Now

This Wife Could Not Tell Her Husband That He Is Fighting Cancer, And She Is Struggling To Save Him All Alone

“We are not educated. Only my husband is well-educated. He finished his PUC. Now, with him fighting for his life, I feel lost. I could not even bring myself to tell him that he has cancer.”

Until 15 days ago, Shivaputrappa, a man whose health is rapidly deteriorating did not know that he is fighting blood cancer. His wife is single-handedly struggling to save him from the deep-end and is now feeling helpless to fund the only treatment that can help him beat the disease.

If I was educated, I would have realized how serious my husband’s illness was long ago

Mahadevi and Shivaputrappa live with their two sons in Gulbarga. Here, Shivaputrappa is a farmer who once had a land of 3 acres but had to sell because of two years of dry skies and failed crops.

“It began during the summer. He had a swelling in the testes. He thought it was the heat at first. But as it got worse, we had to go to the local doctor. Nobody could diagnose it in the village, so we went to the city. They said he needed a surgery.”

I could not tell my husband that he has cancer

Shivaputrappa had a surgery for a tumor. The wound did not heal for a long time. He developed bleeding, severe pain and a high temperature. Mahadevi was worried for him, and they began consulting doctors at a stretch until they discovered he had blood cancer.

“On 30th June, I got this horrid news. I could not tell him. All this while, doctors were saying that they suspect it is cancer, and I let him think that they are still figuring it out. We had to come to Bangalore for treatment at Kidwai. They said he would catch infections if he was there and we had to go to a private hospital.”

The chemo was just the beginning, he needs a surgery to survive

Mahadevi sought care from yet another private hospital, hoping chemotherapy would cure her husband. She did not comprehend the various cycles of treatment that would ensue, and that this was just the beginning.

“I ended up spending Rs. 10 lakhs overall by the end of that treatment. We moved to Narayana Health because I thought it was affordable. By this time, the risk had come down from 85% to 5%. Now, my husband needs a bone marrow transplant to have the best chance at fighting this disease.”

Help me save my husband’s life

Mahadevi had to tell her husband about his disease now that he needs another surgery. Shivaputrappa has lost all hope. He has not been eating food or drinking water. He refuses to take his medicines and does not want treatment. He believes that the disease will kill him.

“My children are not aware of his condition. My husband and I are fighting this together on our own. I have exhausted all my funding options and now I’m broken.”

Shivaputrappa needs Rs. 15 lakhs for bone marrow transplant and Mahadevi is pleading everyone for financial assistance.
Your support can help Mahadevi save her husband’s life.

The specifics of this case have been verified by the medical team at the concerned hospital. For any clarification on the treatment or associated costs, contact the campaign organizer or the medical team.
Click here to save Shivaputrappa.
Donate 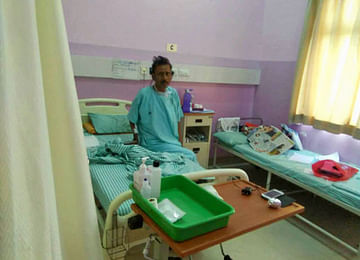 Shivaputrappa has been diagnosed with blood cancer that stole his job as well. Help him survive.