This 5 Year old boy frequently has body temperature as high as 104 degrees due to a genetic condition | Milaap
loans added to your basket
Total : 0
Pay Now

You are sending a message to
Richa Singh
Go back

Shares
Shares
Share on whatsapp
5-year-old Shaurya's life so far has been filled has been a struggle with pain and medicines. In last 5 years, the boy and his family has met several doctors, numerous hospitals and have gone through several medications for Shaurya's genetic condition. The disease doesn't allow him to sleep at night, run a high fever for prolonged duration, numerous complications in his body.


The disease has led to stunted growth, damaged his hearing capabilities and might result in multiple organ failures in future. Shaurya is suffering from a disease called hunter syndrome a rare disease in which a particular enzyme does not get developed in child's body. In Shaurya's case, the absence of the enzyme has resulted into non-purification of blood.

The Ddoctors suggest if he does not get proper treatment in next few weeks eventually all his internal organ will stop functioning.

The impurities in blood hinder blood flow in veins and results to several complications in his body.
The child requires to urgently undergo an enzyme replacement procedure which will be carried out over the course of one year.

The treatment of Shaurya is not possible in India and the drugs which would cure him are made by only two companies and has to be imported in India.

The cost of the same for a year's dose is more than one crore and cannot be borne by the parents. The family requires your help to fund the treatment and save the life of the child.

This is an extremely rare case and unfortunately we cannot treat the child in India - said one of the doctors.

Shaurya was first diagnosed with this disease at the age of 2 year 4 months at Christian Medical College, Vellore, India in March'2014.

He was then taken to All India Institute of Medical Sciences, New Delhi, India to re-confirm and they also confirmed the same diagnosis.

After the diagnosis, the doctors suggested the incapability to treat the child. since then the parents have been running around and reached out to several institutions to seek help. however none them have been able to greatly help them.

Parents even wrote to pm and meet people from the media, sought help from charity institutions, however, none of them have generated enough money to start the treatment.

Shaurya suffers from frequent cough and cold and running nose and severe breathing problem. He can't speak clearly. His body growth is not normal. He is advised for urgent Neuro-Surgery, his health is deteriorating day by day. His life expectancy is very low.

Why Should you contribute?

Arranging funds more than one crore is an extremely difficult task for a middle-class family having a family income of Rs 30000.

Your contribution will help them save their child and make peace with struggles which they have been going through since last 3 years. 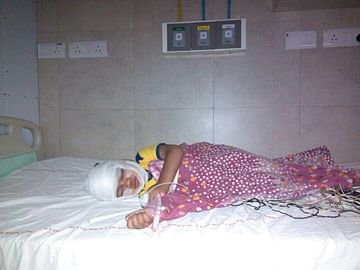 Save Little Shaurya, suffering from a rarest disease "Hunter Syndrome"

This fundraiser is for 5 year old Shaurya suffering from a life-threatening rare disease.