S
You are sending a message to
Selvendran
Go back

Shares
Shares
Share on whatsapp
When 10-year-old Selvendran complained of a headache, his parents didn’t know it was just the beginning of a grave disease. His headache continued for days along with high fever. He was treated for fever but the doctors soon realised it was an indication of something more serious. It started in January this year. He was referred to Apollo cancer hospital in Chennai. A test was enough for the doctors to understand that it was a case of Acute Lymphoblastic Leukaemia, a type of blood cancer.
Thus, began Selvendran's struggle to cope with cancer. Now, his family has exhausted all the money they had managed to collect and is struggling to arrange money for his next phase of treatment.

With an Income of Just Rs.3000, This Father Struggles to Pay for His Son’s Treatment

Selvendran hails from Karaikudi in Tamil Nadu. His father works in a printing shop and his mother is a house maker. He was in fifth grade when he was diagnosed with blood cancer. Unfortunately, he had to discontinue his studies due to his treatment.
“We were happy with whatever we had. I have never prayed to God to make us rich. I was happy. But this has affected us so much. We are not able to manage with my husband’s salary,” says Sudha Rani, Selvendran’s mother.

Unable to Afford the Expenses, His Parents Left Him in the Care of their Relatives

“I sold my jewellery and we asked for loans from my relatives. I know they won’t ask us to pay back immediately, but we have to repay this money. They are equally struggling like us.” Selvendran and his parents moved from his native to a rented house near the hospital but they couldn’t afford the rent. They decided to ask their relative in Chennai to accommodate their son till his treatment ends. His parents went back to their hometown. But, Sudha Rani couldn’t stay away from her son. She stayed with him for a few days. “He is happy when he is back home with us. If he is in Chennai, he is dull and does not talk to anyone. I know he can’t stay without me. But, the circumstances are like this.”
Selvendran needs to undergo treatment for the next few months. He has been taken back to his hometown. He will get admitted to the hospital in the month of June for the next phase of treatment.

Until a few months ago, Selvendran was like any other 10-year-old - playful and full of life. But, at present, he stays at home fighting cancer. He will soon get admitted to the hospital for his next session of treatment. Once an active boy, Selvendran now has no other choice but to stay at home all day long and fight for his life. With our support, he will get a chance to beat Cancer. Funds raised through this campaign will be transferred to the hospital and utilized for his treatment.
Click here to know more and save Selvendran
Donate 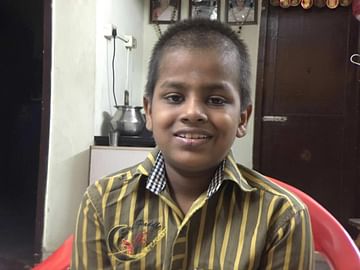 His father has an income of Rs.3000 and struggles to pay for his treatment. Your support is...