This 27-Year-old Teacher Collapsed During His Class And Is Fighting For His Life | Milaap
loans added to your basket
Total : 0
Pay Now

Shares
Shares
Share on whatsapp
"The world is so unpredictable. Things happen suddenly, unexpectedly. We want to feel we are in control of our own existence. In some ways, we are, in some ways we're not. We are ruled by the forces of chance and coincidence."


27 Year old Sunil has been a devoted son and loving brother all his life. He quit his technical job in Delhi and took a teaching job at his hometown Satna so that he could take care of his aging parents, he was the only breadwinner and was helping his younger brother to make a career after their college. However, he can no longer take care of his parents and he can no longer suggest his siblings on their career decisions. Since last 3 months, he is lying on a bed and needs assistance with everything. He can barely speak and has to scribble on a pad whenever he needs something.

For a 27-year-old this is the worst condition someone can be in and it all happened all of a sudden...

An engineer turned teacher, Sunil was helping in building a great future.

Sunil completed his engineering is electronics from VITS (Vindhya Institute of Technology and Science), Satna had aspirations to become an engineering professional, he moved to Delhi to pursue his dreams after graduation but shortly had to return back to his hometown since both his aging parents had health issues.

Sunil has two younger siblings, however, both of them were students and Sunil needed to ensure the burden of his parents should not fall on his young brothers, who were destined to achieve great success.


Sunil already used to help his brothers with their studies and had always wished to help others succeed in life which is why he took a job in TATA ClassEdge as a teacher used to teach high school students.

Sunil's salary was the main source of income in his family, he was bearing the educational expenses of his brothers.

Tragedy struck the family, while Sunil collapsed during one his classes.

On 16th March 2017, it was just another day. Sunil was conducting one his classes and suddenly he felt dizzy and was unable to balance his body. He sat on the chair and within few minutes he felt he was unable to feel left side of his body, his hand, his feet stopped responding to him.

Seeing his condition his students alarmed the school staff. He was immediately taken to a nearby government hospital.

Sunil had blood clot in the brain and with out the surgery his chance of survival was 5% and after surgery, it would be 50%"

The surgery happened and for the next 15 days, he was in the ICU. His condition gradually improved and he started showing some signs of movement until he suffered another complication.

With Meningitis the savings and hope all went away.

The doctors however ascertained that his brain active and he can be saved and since then have been treating them to improve his brain condition.

"Somedays the sodium content in the brain goes low, someday the potassium content goes, every day the family battles with a new fear in hope to see Sunil fit again"

Sunil's condition has improved however the family does not have means to continue his treatment.

The family's financial condition is in a such a bad state that they had to discharge Sunil from the hospital, since they were unable to afford the treatment anymore. Sunil is currently shifted in a rented room where the family stays and looks after him.

With the help of friends and relatives. They have already spent 20 lakhs on his treatment. However due to no money, the road for Sunil's recovery looks dark and uncertain.

"With no money neither the medical store will give us medicines nor the hospital will treat Sunil" - Sushil Dwivedi, Sunil's father

One of his younger brothers has skipped his writing his exams for his B.sc and will face a year back. He was trying to arrange money and helping with his care.


The family is living in a new city with no friends or connections, with little or no money and nowadays feel extremely demotivated and hopeless.

Sunil's mother knew about another death of a young relative in the family and fears of her son's life.

The family needs to settle a bill of 7 lakhs and in order to hospitalize him again it will cost them another 3 lakhs, they are in need to at least 10 lakh rupees excluding the expenses of medicines.

Your contribution is now the only source to save Sunil. Please come forward and contribute generously. 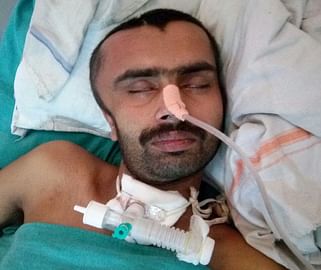 Sunil needs your help to recover from brain haemorrhage

This young teacher collapsed during class and was taken to hospital.