This Professional Racer May Not Ride A Bike Again, However Your support May Help Him Walk Again. | Milaap
loans added to your basket
Total : 0
Pay Now

You are sending a message to
Aditya rao
Go back

This Professional Racer May Not Ride A Bike Again, However Your support May Help Him Walk Again.

Shares
Shares
Share on whatsapp
Sebastian Selvaraj is a 23-year-old passionate bike racer from Chennai. On the 8th of July, Sebastian collided with another rider while racing in the MRF Indian National Motorcycle Racing Championship. He was run over and suffered sever damages to  internal organs. Now, he is fighting for life and financial difficulties are making it difficult to save him
Sebastian was participating in the MRF MMSC FMSCI Indian National Motorcycle Racing Championship. Post the collision, Sebastian was run over by another rider. This has severely damaged his lungs, spleen and other internal organs in the abdomen region. This devastating incident occurred at the Madras Motors Race Track at Irungattukottai.

He was rushed to Saveetha Medical Hospital at Kuthambakkam. He was in a critical condition and complained of severe stomach ache. The doctors conducted all the preliminary examinations and observed that his internal organs in the abdomen region were bleeding.

The Doctors decided to immediately perform an operation to arrest the bleeding of his internal organs.The operation was successful and Sebastian was kept under observation.The Doctors at Saveetha commented that “Had there been any further delay, it would not have been possible to save Sebastian”

Sebastian initially started to respond well to the treatment, but then he complained of difficulties in breathing. Given his grievous situation, he was shifted to the Ramachandra Medical Centre in Chennai to seek expert medical attention.

The Doctors at Saveetha commented that “Had there been any further delay, it would not have been possible to save Sebastian”
Sebastian initially started to respond well to the treatment, but then he complained of difficulties in breathing. Given his grievous situation, he was shifted to the Ramachandra Medical Centre in Chennai to seek expert medical attention.

At Ramachandra Medical Centre, he underwent yet another surgery in the cardio thoracic region.He has been kept under observation on ventilator support. Post the surgery, Doctors conducted a Tracheostomy, a medical procedure which involves creating an opening in the neck to place a tube in the windpipe that allows air into the lungs.

Sebastian started his racing career in the year 2009, after completing his 10th Standard. His family recognized his enthusiasm for racing and supported his decision of pursuing racing as a career. Since his family’s economic situation was not very stable, Sebastian recognized this fact and started riding an auto rickshaw to support his family expenses.

The price of success is hard work. Sebastian imbibed this philosophy and was committed to establishing himself as a successful bike racer.  Sebastian participated in over 50 races and secured several podium finishes in national racing championships.

Sebastian’s father works for a security firm as a security professional.His mother is a homemaker, who takes care of the family. Sebastian has 2 siblings. The elder brother recently secured a job while the younger brother is still pursuing his education.


Sebastian is in the Intensive Care Unit at Ramachandra Medical Centre and is under observation. He is struggling to breathe without ventilator support. His family has spent several days and nights at the hospital, praying for Sebastian’s recovery.

The father commented -”I have been eagerly waiting for an update from the Doctors. I have not been to work since this incident.I’m  worried about the financial costs of his treatment. Please help us” 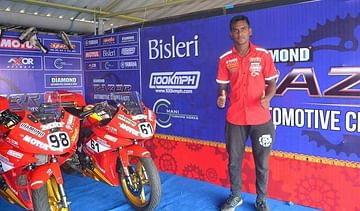 A Fatal Crash During A Race Has Left Sebastian Critically Injured. Help Us In Saving Him

Professional Bike Racer Sebastian is Critically Injured And Can Only Be Saved Through Your Support.