After Adopting and Raising Her As His Own, This Daily Wager Is Struggling To Help His 2-Year-Old Daughter's Heart | Milaap
loans added to your basket
Total : 0
Pay Now

You are sending a message to
Dil Se Mehek
Go back

After Adopting and Raising Her As His Own, This Daily Wager Is Struggling To Help His 2-Year-Old Daughter's Heart

Shares
Shares
Share on whatsapp
Allahuddin’s humanitarian gesture to adopt Nishima and raise her as his own daughter certainly made him feel complete. But now, not only does he fear losing her but also faces a serious challenge as she is suffering from a complex and severe congenital heart disease. Her condition is critical and she needs a heart surgery urgently but Allahuddin has nothing to provide for her treatment and feels helpless.

“When I was told about her heart condition, I was just taken aback. She has been sick for over a year! How do I get her treated? I’m so poor and I don’t have any money. I want her to get well again but it seems like that wish will never be granted. She should have got the surgery last year and now it is already so late.” – Allahuddin, Nishima’s father

Nishima’s biological father is handicapped and so poor that he barely even makes enough to feed himself. He had no means of supporting his newborn daughter. Just a few weeks after birth, even though he doesn’t have much, Allahuddin decided to adopt Nishima, raise her and give her the childhood she deserves.

She has received and given nothing but love and Allahuddin felt that his family is complete.

The 2-year-old was experiencing no symptoms until March 2017. She would lose consciousness for about 2-3 minutes and her fingers would turn blue too. A 2-D Echo test completely crushed Allahuddin and his wife. Nishima was diagnosed to have been born with severe heart defects.

Nishima’s heart defects prevent her body from receiving the required amount of oxygen-rich blood. In addition to low oxygen levels, her lips, tongue, and fingers become bluish in color very frequently. Now, Nishima’s condition is very critical and only a corrective cardiac surgery can save her. From time to time, she has also needed the assistance of an oxygen mask to help her breathe.

Nishima has been unable to get the corrective heart surgery she needs and she is still suffering from a severe congenital heart disease which constitutes multiple heart defects known as Tetralogy of Fallot (TOF).

“She breathes so rapidly. She gets breathless as soon as she starts playing too. She gets scared and starts crying because of this. We visited a doctor in January and he said to get the surgery done as soon as possible. We’re already running late.” – Allahuddin

“I have 2 older sons too. Mohammad and Munsif are 10 and 12 years old respectively. They both love their sister and play with her. My wife and I have raised her like our own daughter and it’s so hard for us to watch her suffer right now. This is the first time we’ve experienced something like this. Never before have I gone to the hospital so many times too.” – Allahuddin

Nishima is late and she needs a heart surgery immediately

Nishima’s condition was diagnosed over 9 months ago and ever since Allahuddin has struggled to arrange funds. She is already 2 and a half years old and needed to undergo surgery way before.

Her only hope of survival is to get a heart surgery as soon as possible. Nishima is, also, very weak. She just started walking around 6 months ago which very late for a baby her age.

Allahuddin and his family accepted Nishima with open arms and loved her like their own. Now, he is running out of time to provide for the life-saving cardiac surgery Nimisha needs.

Allahuddin is running out of time to save Nimisha

“Her surgery should happen as soon as possible, preferably within the next month.” – Allahuddin

With little time left, Allahuddin is in dire need of help to save his daughter. He is a daily-wage laborer and earns a low sum of Rs. 300 per day by working on construction sites. Apart from providing for a family of 5, Allahuddin has also managed to get Nishima the medicines and the treatments she needed until now, spending over Rs. 40,000 on the treatments. He has exhausted all his savings and has even begged and borrowed from many villagers.

The total cost of the cardiac surgery is estimated to be around Rs. 3.5 lakhs. Allahuddin, simply, can’t afford such high costs and is left with no other means except crowdfunding.

2-year-old Nishima’s only hope of survival is to get the heart surgery as soon as possible. She is already late and her humble father, Allahuddin, who accepted her so lovingly, is running out of time to arrange funds. Now, he needs your help to save his daughter.

Your support and contribution will save Nishima’s life. 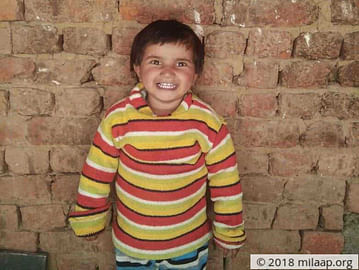 Nishima is suffering from a severe heart disease. She needs a heart surgery immediately and is...