Anjali's cancer relapsed twice and this is her last chance to survive | Milaap
loans added to your basket
Total : 0
Pay Now

You are sending a message to
Rahul gupta
Go back

Shares
Shares
Share on whatsapp
Anjali is a 22-year-old who has been struggling with an uncommon cancer from 2013. Her cancer has relapsed twice and the only way to save her now is a bone-marrow transplant. Her father is a taxi-driver who has by now exhausted all resources in her treatment. He needs help giving Anjali the last shot at getting better.

The news of second relapse has shattered the family's strength

Watching a loved one struggle with cancer is a very difficult. The treatment is perhaps as gruelling and terrible as the disease. Anjali took intensive chemotherapy and radiation therapy for her treatment. Yet, her cancer relapsed not just once but twice.

The ordeal began in 2012, when Anjali started falling sick. She would get frequent bouts of fever, vomitting and weakness. It was only a year later that her cancer was identified as Hodgkin Lymphoma – a rare, fast spreading cancer that starts in the lymphatic system.

Anjali started chemotherapy and radiation therapy. After over a year's treatment, her cancer relapsed. That was the first time and the family was prepared for the possibility. Anjali started her treatment again and for a whole year after treatment she was starting to feel like she had really beaten cancer this time.

When Anjali fell sick this February, her family knew that her illness was no ordinary fever. Her cancer relapsed again and the only cure this time is a bone-marrow transplant. In the face of the bad news, it is hard for the family to stay strong. Especially when the procedure is beyond their limited means.

Anjali's siblings have had to dropout because of the treatment expenses

Anjali and her twin Anjani are the youngest children in the family. Anjali was studying BSc. and her own education had to be stopped because of bad health. But because of lack of funds her brother and older sister had to drop out of studies too. They were all needed to take up small jobs and pitch in the expenses.

Anjali with her mother and siblings

Anjali feels sad that her family's fortunes have taken such a downturn because of her condition. She wants to fight back and get better, but if the situation persists, she will not have a choice. Even though every one in the family has made personal sacrifices to save Anjali – it will still not be enough to save her.

Five years of treatment has left this family financially and emotionally exhausted. To get better Anjali needs a bone-marrow transplant. The family needs Rs 5 lakhs for the procedure and they don't have even that left. Contribute and give Anjali a third chance to beat Cancer. 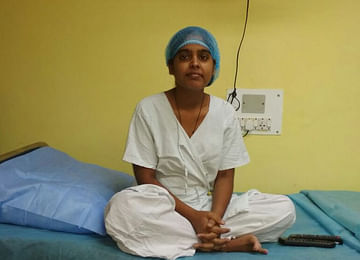 22-year-old Anjali's cancer has replased a third time. Help her get treatment and recover.