Thousands of Birds are Dying from Kite Flying. Save Them this Sankranti. | Milaap

A
You are sending a message to
Aanchal
Go back

Thousands of Birds are Dying from Kite Flying. Save Them this Sankranti.

Shares
Shares
Share on whatsapp
Thin and lethal, even expert kite-flyers sometimes cut their skin on the glass-coated Chinese manjha. To the hapless birds in the sky, the thread comes from nowhere and slices through their bodies. For the kite-flying season coming in the next two months, switching to the less sharp Indian manjha can mean life or death for thousands of birds in India.

Every January, kites in hundreds of colours fill the skies in India – particularly Rajasthan and Gujarat. The sun on Makar Sankranti is supposed to be restorative – bolstering the body against accumulated pathogens of the winter. The winter crop is harvested and days become longer and warmer. Everyone gather on terraces to watch fighter kites battling for supremacy. The sharper the string is the better chance of cutting the competitor's kite and winning.
Colourful kites fill the sky on the harvest festival - Makar Sankranti

Kite-flying is a apt expression of the elation of Sankranti. But for thousands of birds that cannot avoid these threads, it is a death knell. In Ahmedabad alone, over 2,000 birds (including rare and endangered species) are injured every year. They die or lose a body part while struggling to escape the tangles.
The celebrations can be just as fun with some consideration for the other residents of the air, experts say. Instead of using the glass-coated nylon manjha from China, the Indian cotton manjha could be used. Kite-flying could be done before or after dawn and dusk – a time when birds are most active.
A bird that succumbed to its injuries due to getting tangled in the string
“Perhaps we can modify bits and pieces of the tradition to remove the use of manjha and using cotton strings. We can fly the kites in the day and in places where there are fewer birds,” says Shannon Walajtys, Animal Rescue-Disaster Manager, International Fund for Animal Welfare (IFAW). She is one of the many activists working to create awareness of the dangers of the manjha.

Spreading awareness matters and is the first step in making Sankranti safe for the animals. “The WildlifeTrust of India (WTI) works with animal rescue agencies in Rajasthan and Gujarat every year, before Sankranti and we see a definite change in people's mindset,” says Aanchal Saxena, Assistant Project Officer, WTI.
Rescue team from IFAW and WTI help a Black-shouldered Kite

WTI has a multi-pronged approach to create change in the situation and this is the third year of their efforts to help birds during Sankranti. The first year was about sensitisation and creating awareness so people knew the dangers. A rescue team was prepared with training a volunteer network.
The second year, alongside the awareness programme and training, they got the Chinese manjha officially banned. This year, they are working with law enforcers to make sure the Chinese manjha is not actually in stock, besides awareness and rescue training programmes.
Citizens sign a pledge to fly kites responsibly during Sankranti

Help WTI bring real change and set an example in integrating celebrations with kindness towards animals. Fund their efforts to make sure that the Chinese manjha stays out of markets and Sankranti can become safe for everyone.
Donate to their campaign now.
Donate 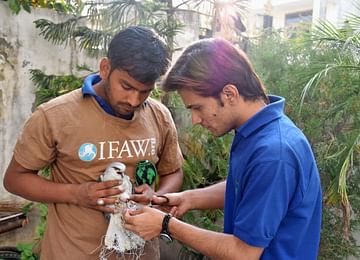 Help WTI's efforts to save the thousands of birds that are injured every year due to kite-flying.