Urgent: 6-year-old On Artificial Lung Machine Is Now In A Critical Condition And Needs Your Support To Survive | Milaap
loans added to your basket
Total : 0
Pay Now

You are sending a message to
Sandhya
Go back

Urgent: 6-year-old On Artificial Lung Machine Is Now In A Critical Condition And Needs Your Support To Survive

“The last thing Saran said to me was, ‘Appa, I want to go home!’ He was pulling at the tubes and wires. He did not want to stay on the hospital bed. He could not even breathe. They sedated him, and he has not open his eyes.”

6-year-old Saran fell victim to a fever that turned out to be dengue. He is suffering from severe lung infection and is in a critical condition. His parents are at a loss for words, with their child in the ICU struggling to stay alive.When everyone was sick, he was kicking strong
The climate change affected everyone in Ashok’s family. His wife Suganya, their 6-month-old son, and his elderly parents suffered from a bout of cold and fever. Ashok recovered quickly. He was glad Saran did not catch the bug. However, things changed even before he could blink.

“On 19th September, he had a fever. For 4 days he had a high temperature. The local doctor said it could be a viral infection and gave him medicines. It did not subside for over a week. Again, we went back, he just changed the medicines and asked us to wait. When the fever refused to go, the doctor changed the medication again. Saran’s temperature came down. Even before we could be relieved, things turned worse.”

The machines are keeping him alive now

Saran had begun vomiting. His face lost all color, and he began bleeding from his nose. The anxious parents rushed him to a hospital. He was in the ER for a day. He was diagnosed with dengue. His breathing was labored and he had developed a lung infection.

“At the end of day 2, he was in a serious condition. The medicines were not helping. The doctor put him on a ventilator. This past Friday, the doctor said we will lose him, that it was a matter of just 4-5 hours. Then Saran began to fight, and so he was hooked to an ECMO. The machine is breathing for him. His heart is weak, his kidneys are injured. For a while it seemed like the machine was just keeping him alive.”

The infection has taken over Saran’s body. It is in his blood and organs. Although he is getting aggressive treatment, he needs time to heal. He is fighting hard, and recovering at his own pace. This little one is a fighter, and his strength has given everyone hope that he will make it out in one piece.

“The doctor told us that he needs a few weeks, and then he will be fine. All his tests show slight improvement. I still remember how Saran kept asking me to take him home before they sedated him. He seems so frail among all those machines and tubes. I just feel helpless looking at him suffering like this.”

Saran needs to be on the ECMO for at least 4-6 weeks until his lungs improve. He would need blood transfusions and dialysis as well. Although he is critical, he can recover completely with necessary treatment. The estimated cost for his care is Rs. 20 lakhs. Ashok is doing his best to source as much as he can but needs your help to save his son.

“My wife is here in the hospital all day and goes home to our baby in the night. We are torn and emotionally exhausted. We just pray and hope a miracle and bring Saran back home to us soon.”

Contribute towards Saran’s recovery and help him go home healthy and safe.

The specifics of this case have been verified by the medical team at the concerned hospital. For any clarification on the treatment or associated costs, contact the campaign organizer or the medical team.Click here to help save Saran . 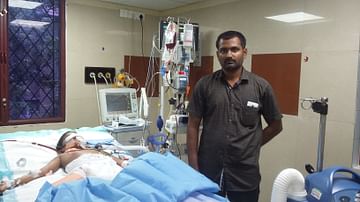 Saran caught dengue and now he is in a critical condition struggling to survive. Help him recover.