12-year-old Sanju Bleeds Every Time He Goes To The Bathroom And He Needs Your Support To Survive | Milaap
loans added to your basket
Total : 0
Pay Now

“My son cries every time he goes to the bathroom. He has severe stomach pain and there’s blood in his stools. He’s too young to deal with an illness this grave, and I don’t know how to explain to him that he’s fighting to live.”

Two years ago, Sanju returned home from school bleeding from his mouth. His parents were worried and shocked. They quickly took him to the doctor in a nearby clinic, who then advised the parents to take him to a hospital to get tested immediately. Sanju was diagnosed with a serious bone-marrow disease. He was only 10-years-old. He has been fighting this rare disease ever since for the last two years, with no improvement. Sanju needs an immediate bone marrow transplant to live.

Every Day Is A Battle For Sanju

12-Year-Old Sanju doesn’t understand that he’s fighting a life-threatening disease. He cries often and wonders why he bleeds every time he goes to the bathroom. His father, Holiya, has tried to give his son a normal life and not let the illness crush Sanju's spirit. However, Sanju can’t even go to school on his own anymore.

“He loved going to school. He even used to walk to school, but now he’s too weak. I try and motivate him to go so that he is distracted from his pain. But I don't push him. When he wants to go, I drop him and pick him up from school," says Holiya.

Sanju with his parents and sisters.

Sanju will turn 13-years-old on January 1, but Holiya is worried that he might not make it.

“Sanju talks about what he wants to do for his birthday. I also tell him that we will celebrate with his favourite cake. How do I tell my son that if I can’t pay for the transplant, he might be celebrating his birthday in the hospital, or worse, not at all?”

Holiya has been trying to do all he can to ease Sanju’s pain. Sanju’s mother and three sisters also try to keep him motivated, but Sanju’s condition is deteriorating. His condition is called Fanconi Anemia. It makes Sanju very weak and highly susceptible to infections. Even a small fever in the family can cause him a life-threatening infection. He has stomach pain and blood in his stools which can only be regulated with medication to a certain extent. The only cure for his pain and suffering is an urgent bone marrow transplant.

His Father Can Save Him, But The Procedure Is Too Expensive

The family had lost hope when neither his mother nor his three sisters were a suitable donor match for the bone marrow transplant. However, after further tests, his father was found to be a suitable match to donate his stem cells.

“I was so happy that the doctor said that I was a match. There’s hope for Sanju now, and I will do anything I can to save my son. He has suffered so much in these two years. I wouldn’t wish that on anyone,“ Holiya says.

Sanju with his father at the hospital

Although Holiya is relieved that he’s a donor match for Sanju, he is extremely worried that he will not be able to afford the expensive procedure. When he was told that the transplant cost Rs. 32 Lakhs, all his hopes came crashing down.

Holiya is a daily-wage worker, and money hasn’t been a stable in his life. There are days when he even returns home empty handed. He is the only earning member of the family. His oldest daughter, Shakeela, is also ill and suffers from a heart disease. He not only has to pay for his family’s daily needs, but also the medical bills for both his children.

He has already spent Rs. 2 Lakhs on Sanju’s treatment so far. The expense for the transplant is an unsurmountable amount for Holiya. He hopes he will be able to pay for it somehow and save his son.

Sanju is suffering from a serious bone marrow disease. He needs to undergo an immediate bone marrow transplant . His father, although a suitable donor match, can’t afford to pay for the treatment with his salary as a daily wage worker. The transplant is estimated to cost Rs. 32 Lakhs. Sanju might not make it till his 13th birthday if the transplant isn’t done at the earliest. 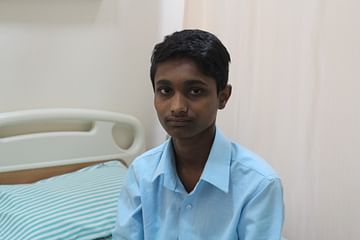 Sanju needs an immediate bone marrow transplant to live. Your support will save him.