My Son’s Large Intestine Has Been Removed And His Other Organs May Die As Well From This Infection | Milaap
loans added to your basket
Total : 0
Pay Now

You are sending a message to
Subhadeep Mondal
Go back

Shares
Shares
Share on whatsapp
It’s been 23 days since my son has been in the ICU fighting for his life. His entire large intestine has been removed due to severe infection. He can’t breathe, talk or even move on his own anymore. Just last month he was preparing for his final exams and now, we don’t even know if he’ll make it to the next day. The doctors told me that if we take him out of the ICU, he might not survive. He’s only 20-years-old. We thought he had his entire life ahead of him.

It all happened so suddenly. For a few days, he had blood in his stools. I remember he was a little worried, but even he didn’t think that it was fatal. We took him to the doctor. His condition didn’t improve and before we knew it, he was critical. Everything went downhill from there. He was flown to Manipal Hospital, Bangalore as an emergency. To see my once active, healthy son, crumble in front of my eyes, is the most heartbreaking sight ever. As a mother, it kills me inside that all I can do now is stand by his bedside and watch over him, helpless.


Priyam's parents are waiting for him to get better again

In Bangalore, his condition stabilized for a few days. We were relieved and began to hope that we could take him back home soon. Unfortunately, his condition suddenly deteriorated once again and the next thing we knew, Priyam was being taken for surgery. We were told his entire large intestine was severely infected and they had to remove it to prevent it from spreading to the rest of his body. That was the moment I truly realized that my Priyam is fighting death.


Priyam before his illness

Priyam shifted to the ICU shortly after the surgery and has been there ever since. We're all devastated. Every day I look at his old pictures and breakdown. It feels like this disease has taken everything away from him, he's changed so much. Sometimes I wonder if I'll ever get my son back to the way he was.

His infection has now spread to his lungs, so now he can’t even breathe on his own. Priyam’s infection is slowly taking over his entire body, and there’s nothing I can do to stop it.

When I look at him, all I think about is the last time I saw him at home. Priyam was studying for his final BSc exams then. He was doing his honours in physics and was already planning his MSc after graduation. He was so dedicated. Even as a child, he was never troublesome and was always responsible. He has many friends from school and college. They recently came to visit him in the hospital and were shocked to see how he’s become now.

Priyam can’t talk now, so he communicates through signs and sometimes writes things down. He was so happy to see his loved ones around him, but I can see the worry on his face. He doesn’t know the exact cost of the treatment, but he knows it's way beyond our reach.

My husband is a teacher in a primary school in our hometown in West Bengal. There’s no greater joy than teaching children for him, but his income is not enough to save our son’s life. And there’s no greater sorrow than that. He's heartbroken that no matter how hard he tries, he's still failing to save him. My older son is also studying and I'm a housewife. My husband is the only earning member of the family. His daily expenses are too costly for us, but keeping him in the ICU is the only hope we have now.

The last thing Priyam said was that he was feeling better after his first surgery. He said the pain had reduced and that he will get better in no time. That was a few hours before his condition worsened and he was taken to the ICU. I don’t know what’s happening or why my son must suffer so much. All I pray for is that his life is saved and I get my son back.

My son needs to stay in the ICU longer to recover. If his infection spreads, he will need another surgery soon and might not make it. However, he’s improving. His temperature and blood pressure aren’t fluctuating anymore, and the doctors say that it’s a good sign. The only way he can continue to improve is if he stays in the ICU. He needs 15 lakhs to continue treatment, but we have exhausted all my savings on his medical bills so far. I need your help to save my son now.

Your support can save Priyam’s life. 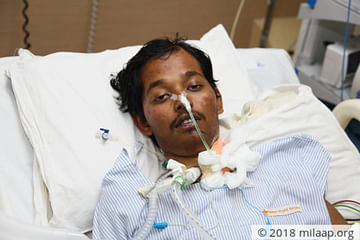 Priyam needs to stay in the ICU longer to survive. Your support can save him.