You are sending a message to
Prasanna Benagi
Go back

Shares
Shares
Share on whatsapp
19 Year Old Pavan hails from Mandya, Karnataka. Last 18 years have been really amazing for him. He was born as a younger brother to Krishna Mohan in a loving and caring family. He completed his schooling with good grades and managed to get admission in the engineering college of his preference. He was aspiring to become a software engineer just like his elder brother and had great dreams to fulfill in future.
However, nature and fate were not kind to him. On the fateful day of 1st Jan of this year, Pavan suffered a major brain stroke and fell into a coma. He has been in the coma since last 40 days and looks extremely weak. Looking at his state the family is unable to believe the fact that this is same boy so cheerful and full of emotions a few days ago.
The Doctors are suggesting it will take months for Pavan to recover from the coma and he currently needs 24 hrs nursing assistance to speed up the recovery process. Which requires funds close to 12 lakh rupees since he would be staying in the ICU in the coming weeks. The family has already spent close to 6 lakhs rupees for his treatment and have exhausted all their savings.

Please support this cause since your contribution will help Pavan live.

The new year has brought sadness to the family

If I could get a chance to go back in time, I would have saved my brother from the stroke - Says Krishna

On the eve of 31st December Pavan appeared for his last exam of 3rd semester and was excited and looking forward to short the winter break. He had a new year resolution to get fitter and had decided to start running from the first day of the year.

On the morning of 1st Jan, he set out for a run just around his home. Pavan's mother could hear his footsteps however after 15 minutes she could not hear any footsteps, she thought he might be resting and would have stopped after half an hour when she did not hear from him. She got out of the house searching for him. She found lying unconscious just beside their home.
She sprinkled him water, which made woke him up however he was unable to recollect how fell unconscious, he said he was fine and wanted to have his breakfast. After finishing his breakfast in few minutes, he threw whatever he had eaten and started screaming and complaining of a severe headache and went unconscious.

He was rushed to a hospital in Mandya, however, doctors referred him to Colombia Asia Hospital. His college friends took him to Mysore since his brother was working in Mumbai. The doctors at Columbia suggested they would have to operate him immediately since there was a blood clot in the brain. The doctors also confirmed that he fell into a coma and would have taken him weeks to recover from it.

Since that day Pavan has just been laying on the bed without any movements and everyone in the family has been hoping to hear his voice.

Pawan is a first-year branch topper

Pawan had a strong urge to follow his brother's footsteps. He also wanted to become a software engineer. Initially he was unable to secure a seat in computer Science branch, however, he was hopeful and with sheer determination and hard work he topped his class in mechanical branch and was admitted to in computer science.

I pray every day for Pawan so that he may fulfill his desire - Says Krishna
Krishna is still hopeful that Pavan will be able to fight this battle and will wake up from his sleep in the near future.

Why should you contribute?
Pawan is a young boy and has a long life to experience, supporting his medical treatment will make him fight the battle better and come strongly out of it.

Pawan's brother Krishna, who works in TCS is the only working member of the family he has already spent all his savings on Pavan's treatment. The family has spent nearly 6 lakhs by arranging funds from various sources.
Pavan still has to spend at least two months in the hospital, for which the expenses come close to 12 lakh rupees since the daily expenses in the ICU come close to 20 thousand rupees.

Your contribution will help the family to arrange money for his further treatment and create a sense of hope to see him healthy again.

Supporting Document
The specifics of this case have been verified by the medical team at the concerned hospital. For any clarification on the treatment or associated costs, contact the champion or the medical team. 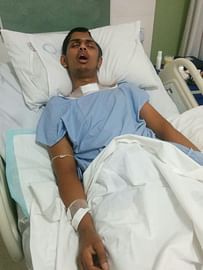