My 14-year-old Son Needs Urgent Surgery And I Need To Take A Loan Even To Consult A Doctor | Milaap
loans added to your basket
Total : 0
Pay Now

Shares
Shares
Share on whatsapp
Pillayya's 14-year-old son has a hole in his heart. Lokesh suddenly became sick last month and his condition is getting worse. Pillayya is a construction worker who has to take a loan even to consult a doctor. Only a heart surgery can save Lokesh and his family is desperate to save him.
Lokesh with his parents at the hospital

When Lokesh was just 2 years old, the doctors told his parents Pillayya and Mahalakshmi that he had a hole in his heart. They borrowed from their family and somehow got him an operation that fixed it. After that, he grew up a normal child – happy, laughing and fighting with his sisters.

But what looked like a regular fever was the start of Lokesh's illness. A month back, Lokesh developed a fever and complained of feeling cold. When he started vomiting, his parents took him to a hospital. By now, they were very scared – wondering what they would do if he needed another surgery.

Before he fell sick, Lokesh was an active, happy child

In a week, their worst fears were confirmed. Lokesh needs a surgery and he needs it urgently to survive. In just one month, he has become so weak that he doesn't even have any energy to speak. He has lost his appetite and stopped going to school, walking or even watching the TV.
Lokesh at the hospital

“He is so full of life. Always up to something, the chatterbox of the house. But now he hasn't said a word in weeks and it is strange to see him this way. Our parents try to make him comfortable, but he is so weak – he looks like nothing will make him feel better,” says his older sister Shweta.

To take his sick son to the hospital, Pillaya has to first borrow money

Pillayya is the sole earning member of the family and his monthly income is only Rs 5,000 a month. In the last month alone, he has spent over a lakh for Lokesh's treatment. Even for a follow-up visit to a doctor, Pillayya first has to find someone willing to lend him some money to take his son to the hospital.
The only way to save Lokesh is a surgery that will cost Rs 5.7 lakhs. Pillayya has no way to collect that much in time to save Lokesh. Every day that they wait – Lokesh seems to fade away a little bit more to his parents. They are desperate for help so Lokesh can get a life-saving operation at the earliest.

Pillayya is a daily-wage worker and he has no resources to save his child. His income is not even sufficient for the daily needs of his family. Every trip to the hospital has become an ordeal and he just wants Lokesh to get better soon.

Contribute to help this scared father save his son. 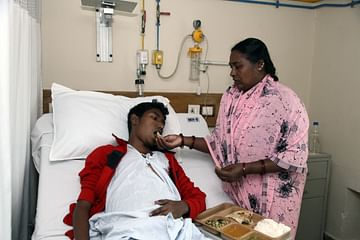 Lokesh has a hole in his heart and he needs a second surgery to get better. You can save him.