This 3-year-old With Cancer Is Bleeding Uncontrollably And Needs Immediate Treatment | Milaap
loans added to your basket
Total : 0
Pay Now

"He keeps screaming in pain and we feel absolutely helpless. I cannot even console him."

Kabil is a 3-year-old whose cancer was not caught till it was very late. His condition has worsened and he is in the ICU fighting for his life. His parents are daily-wage workers who have borrowed till now at high-interest rates to get him treated. No one will lend them anymore and they need immediate help to save their son.

He is having severe side effects from chemotherapy

“I used to send my son to the Anganwadi while I went to work. He was such an intelligent, loving child that he took care of the other children too. Did God make him so wonderful to punish us and hurt us all the more when he is sick?” says Kabil's distraught mother, Uma.

Kabil has been taking chemotherapy for the last 8 months. Uma feels that Kabil is not getting better and continues to have such severe side-effects owing to the rare form of cancer. Kabil has Embryonal Rhabdomyosarcoma – a cancer of the body's connective tissue. These are tissues that cover everything in the body connecting bone, organs to the rest of the body.

We were not even thinking about cancer when he got sick

When Kabil got sick last October, no one suspected that it would be cancer. He was being treated for his fever and flu. His condition only kept getting worse. By January, his nose started bleeding and his parents rushed to Chennai from Namakkal to a bigger hospital.

After getting treated there for two months, Kabil's parents were asked to continue treatment at Narayana Hrudayalaya, Bangalore. Kabil's mother and grandmother are here with him, while his father continues to work and send as much money as he can.


Kabil with his parents before his condition deteriorated

He is now bleeding from his nose and mouth

Kabils' parents are both daily wage workers. His mother Uma used to work in fields while his father Satheesh works in a nearby textile mill. Together they earn Rs 5,000-7,000 a month depending on how much work they find. Ever before cancer, theirs was not an easy life.

But life has taken on an unreal nightmarish quality since they found out that Kabil is sick. Kabil's condition is difficult to treat and only invasive biopsies can show if the treatment is working or not. Unfortunately, the disease has metastasized and now he has begun to bleed uncontrollably from the nose and mouth. He is in the ICU now.


Kabil is fighting for his life in the ICU

“The doctors are saying the treatment will cost another Rs 10 lakhs. Though we managed treatment till now, there is no way we can continue treatment. My son is screaming in pain asking us to save him. We can't tell our 3-year-old that we are helpless,” says Uma.

Uma says Kabil has become unrecognisable - he's lost all his hair and his skin has turned dark. But Uma and Satheesh are desperate for help that will help them continue treatment for Kabil so he can finally get better. They are facing the terrible prospect of letting their innocent child down because they cannot save his life.

Kabil's parents have borrowed over Rs 10 lakhs to keep the treatment going till now. They are paying a crippling cumulative interest and no one will lend them anymore. Finding external help is their only hope of saving their precious child. 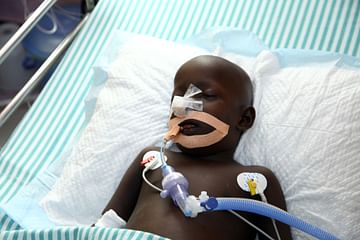 Kabil has been fighting a rare cancer and needs to stay in the ICU to survive.