Having Lost 2 Children, Your Support Can Help This Mother Save Her Only Son | Milaap

N
You are sending a message to
Nushahath
Go back

Having Lost 2 Children, Your Support Can Help This Mother Save Her Only Son

Shares
Shares
Share on whatsapp
Like most parents of 6-month-old babies, Nushahath would love to see her little son, Hamil giggle at the funny faces she makes. But to see him plugged to wires and needles breaks her heart. With their little son’s free spirit trapped in a weak body, it pains them to see third child go through the same ordeal that their 2 elder sons went through.
Nushahath  and her husband lost 2 kids to fatal disease in less than 5 years. Since then, the couple fights between fear and hope every time they wait in the hallways of Apollo Hospital.

What Started As Nose Bleed Was A Severe Blood Disorder

One fine morning, little Hamil started bleeding through his nose. Though Nushahath  wanted to write it off as a reaction to weather change, deep inside she knew it wasn't normal. It brought back memories of the sleepless nights of their 1-year-old son’s struggle to survival.
Soon Hamil’s bleeding incidents aggravated to urine. The tests confirmed that their little son has Wiskott-Aldrich Syndrome, a rare disease in which the bone marrow and the stem cells are severely damaged. Unfortunately, his two elder brothers were diagnosed with the same condition and lost their lives.

Nushahath, lost her first son when he was just a year old and her second son when he was just a 3 months old. She and her husband didn't know that the boys had Wiskott-Aldrich Syndrome. Till the end, her sons were not diagnosed of what they were suffering from. After repeated tests of cancer,the doctors informed that they were not affected by cancer. But the disease remained a mystery.

A Bone Marrow Transplant Is His Only Cure

Hamil has been bleeding from his nose and mouth. This has alarmed the doctors and they have advised a bone marrow transplant immediately. Initially, Hamil's sister was found to be a half match to be the donor for the transplant but the doctors searched for a full matched donor.
Fortunately, they found one and there is now a lesser risk for the transplant.
Hamil's parents have left their daughter in custody of her grandmother and are staying in Chennai in a rented room near the hospital so they can take Hamil to the doctor if there is any emergency.
“With cure just a stone’s throw away, it would be a crime to give up now. My husband has been trying hard to find as much work as possible to earn every penny we can. I do not have it in me to watch Hamil slip away from me like my other two sons.”, said Nushahath as her eyes well up seeing Hamil smile innocently.

How You Can Help Hamil?

Hamil's father is a daily wage worker and mother is a homemaker. Her family hails from Kozhikode, Kerala. The only cure for his disease is a bone marrow transplant and the family has no way to arrange for funds required for this. They have lost all their savings to medical expenses of their children. You can help Nushahath save his only son’s life. Donate here.

Supporting DocumentsThe specifics of this case have been verified by the medical team at the concerned hospital. For any clarification on the treatment or associated costs, click here to contact the campaign organizer or the medical team

Make a contribution and help this mother save her son
Donate 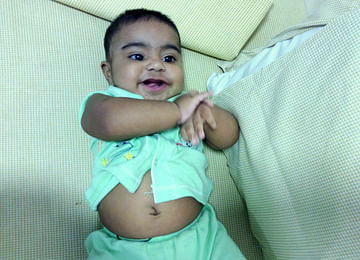 Hamil is diagnosed with a rare disease that took the life of his siblings. A bone marrow...