Both Their Children Will Bleed To Death If These Parents Can't Afford The Treatment In Time | Milaap
loans added to your basket
Total : 0
Pay Now

“Devanshi and Garvit are inseparable. One won't go to sleep unless the other one lies beside her. They do everything together even if it's going to the hospital. The sad part is that they are suffering from the same disease.They even hold each other's hand while getting injections. It breaks my heart to think that if I can't continue their treatment I will lose both my children. I can't imagine a world without them but there is no way I can afford this, - Hemraj, father of Devanshi (3) and Garvit (5).

Within a span of 1.5 years, his children fell ill from the same disease

It was a normal day in the household when Rajkumari was finishing her chores while her children were playing near the kitchen. Hemraj had gone for work at his bicycle repair shop. Suddenly Rajkumari heard Garvit scream out in pain,  holding his head. Before the baffled mother understood anything, Garvit started vomiting.

“I was trying to give him some medicine when he suddenly fell unconscious. In just a few seconds, everything changed. My husband came back from work and we took our son to the hospital. After almost a week in the ICU, doctors told us that our son had severe brain bleeds. It was due to a rare genetic disorder. We had thought it was a viral infection but this was a rude shock for us,” - Rajkumari,mother.

In a cruel twist of fate, Hemraj and Rajkumari’s daughter was also in the clutches of this genetic disease in just a few months time. The little girl was bleeding from her lungs and vomiting out blood. She was admitted to the hospital and the parents were told that she too has the same genetic disorder as her brother.

Garvit and Devanshi are suffering from Factor XIII deficiency - a rare, genetic bleeding disorder characterized by deficiency of specialized proteins that are essential for the blood to clot properly. There is no definitive cure for this disease, the only thing that can keep the children in good condition are transfusions of fresh frozen plasma (FFP).

“My wife’s pregnancy tests were nothing out of normal. The children were even healthy at birth. But over the last one and a half years, our world has turned upside down. We have to take great care of both of them - even a small bruise can turn out to be deadly. But the sad part is no one believes my children are so sick, everyone says they look so normal.  Only if they knew how many restrictions they live under every day."

Despite restrictions, Garvit’s doctor has given him permission to go to school. But every day, the parents live in the fear that they would hear some bad news from the school. It is only the plasma transfusion that is giving them a normal life. But they need it every month and it costs Hemraj around Rs 16,000.

“Seeing her brother go to school, Devanshi keeps asking me when she can go too. I lie to her to keep her questions at bay but the truth is it is too risky for her to go to school now. I own a small bicycle repair shop and make about Rs 20,000 a month. My monthly expenses are far more than what I earn. There is no one to help me now but my children need me the most now, they need this treatment for another 5 years. But without help, I won’t be able to save my children, please help me.”

The brother and sister are fighting a dangerous disease but their father can't afford the only treatment that can give them a normal life. You can help save their lives 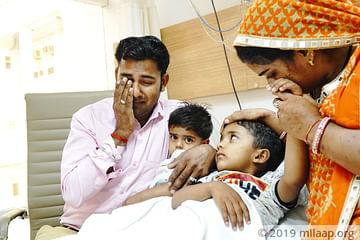 In The Span Of 1.5 Years Both Their Children Fell Ill With The Same Disease

Hemraj is spending more than he earns every month but still can't save his children, he needs help