Support This Father Save His 5 Month Old Son | Milaap

You are sending a message to
Vijay Kumar
Go back

Support This Father Save His 5 Month Old Son

Shares
Shares
Share on whatsapp
Vijay takes his grey Activa out with a bunch of papers every morning and goes round the city verifying each profile. It is 5 p.m. and he reaches home to his wife and 3-month-old baby waiting for some healthy family time.  First look at Vijay’s life, it all seems routine and ordinary. But take a closer look and you will see the struggles of many such families from a lower income group trying to make a living in the big city of Bangalore.

Vijay works for a background verification company in Bangalore. He married Prabha three years ago. A love marriage against their families wishes, steered their lives away from Madurai to the bylanes of Rammurthy nagar, Bangalore. A rented house became their home. But the winter of 2015, brought more unexpected struggles into his life.

The Night Of Impossible Choices

“Prabha went into labour 3 weeks before her due date. Her blood pressure shot off the roof. I remember the doctor walking up to to me, holding my hands, and telling me how bleak the hope of saving either one was. They asked me to choose between my wife and my son, if it came to saving one of them. Over the last three years, all me and my wife wanted was a baby to complete our happiness. How was I suppose to pick?" On 14th September 2015, he became a father to a baby boy. But this joyous occasion is inked as a ‘petrifying night’ as he calls it.

Doctors managed to save the mother and son. But when neither Vijay nor Prabha got a chance to hold their son. It dawned on Vijay that premature baby care comes with its own set of complications. The baby was moved to Chinmaya Mission Hospital (CMH). Under-developed lungs, stomach obstruction and the hernia. These were the only updates Vijay got from the doctors, every time he asked them when he could hold his baby.

'Every Time I Change His Bandages, I Wish To Be Just Another Father Changing Diapers.'

The baby has been in and out of the hospital. Doctors have confirmed that the baby has a 90 percent survival chance provided he is given an aggressive treatment of packed cells, antibiotics with NICU care and immediate hernia surgery to avoid the possibility of another stomach obstruction. One day in NICU costs Rs,15000. With pending bills of nearly 6 lakhs and a salary of Rs.15,000 only, Vijay has run out of options. As a father, he wants to do everything to save his son. He wants to give him a name and hold him with no fear of losing him to these complications. “I have moved to a night shift job, to give my son all the care he needs. Every time I change his bandages, I wish to be just another father changing his son’s diapers.”

How Can You Help Vijay

Vijay earns Rupees 15,000 a month. His wife is a home-maker. His income is barely enough to cover his son’s everyday antibiotics. Medical expenses since September 2015 have already been a struggle. It's not easy for a parent to see his child fight complications this grave. Your support will save his only son. Please contribute now and help Vijay. 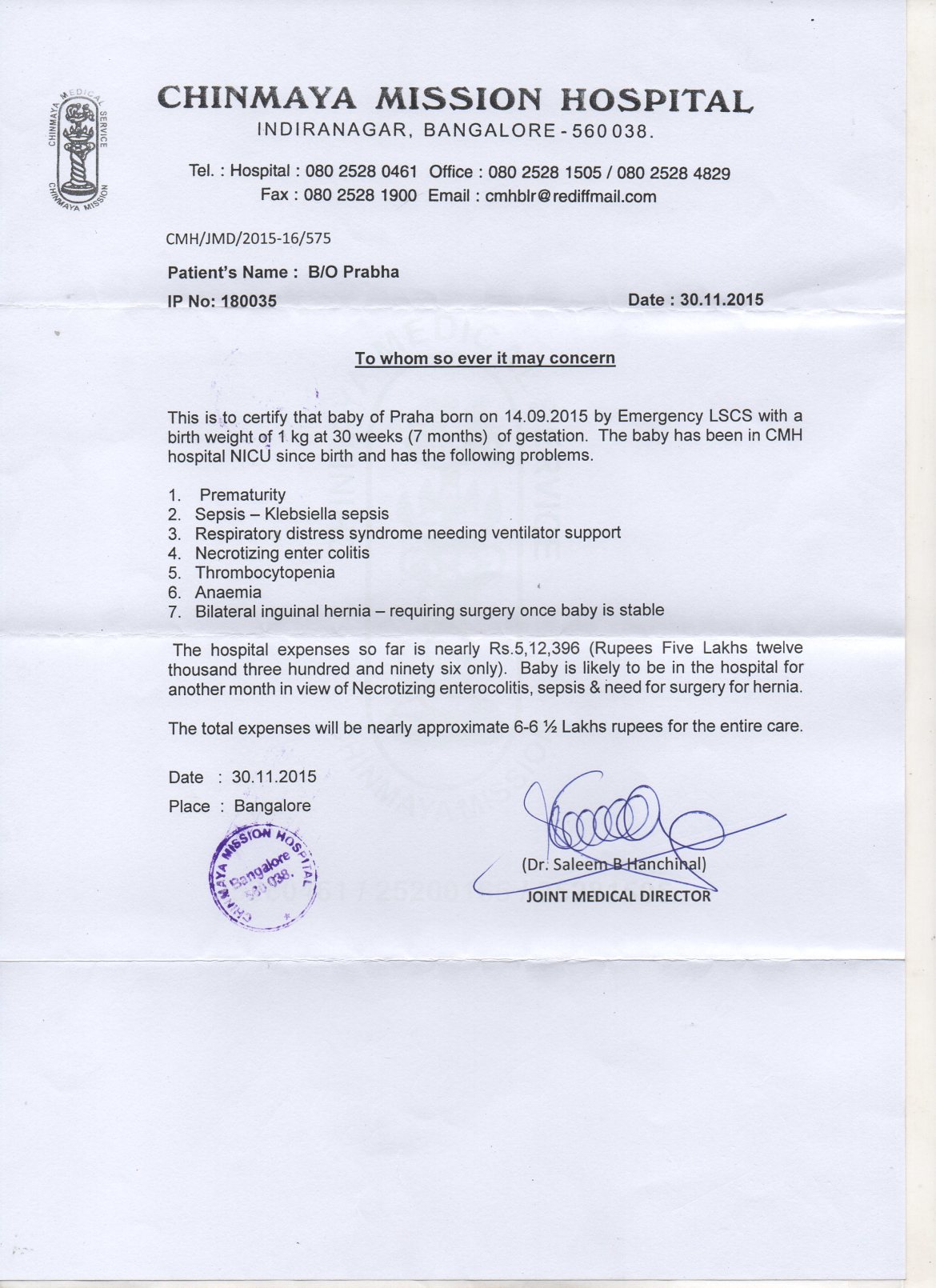 Click here to learn how you can save this 5-month old.