RS
You are sending a message to
Ramesh Shetty
Go back

Shares
Shares
Share on whatsapp
Ramesh and his wife Pratima had a baby boy last year in January. They named him Rihansh, meaning God’s Gift, and he was as he completed their dream of having a family of four. For the first four months, joy was in the air with the parents and elder brother doting over Rihansh day in and day out. Soon after, this baby’s health took a turn that has the parents worried sick for his life. It began with a hernia for which Rihansh was treated. He then showed symptoms of a fever that would not subside. Months of testing finally gave them the diagnosis that their eight-month-old had a rare birth defect that affects his immunity to diseases.
Rihansh is now 1 year and 9 months old, unaware that he is battling for life because of a dangerous disorder, and he needs a Haplo Identical Bone Marrow Transplant.

A long road to diagnosis

When Rihansh was admitted to the hospital for his hernia surgery, Ramesh quit his job as a waiter at a Mumbai restaurant to stay by his wife’s side and take care of the little one. The dedicated father then rushed the baby to every doctor he could think of to cure his baby of the relentless fever. The battery of tests performed over four months proved inconclusive and no medicines managed to help the fever subside. The family then came to Bangalore where the doctors at Narayana Health diagnosed Rihansh of Chronic Granulomatous Disease.
CGD is an inherited primary immunodeficiency disease that causes people to get very sick even from infections which are mild for healthy people. It commonly affects boys, and the children with this disease are quite healthy at birth but develop severe infections as they are exposed to a germ spread environment.

The alternate option to save Rihansh from germs

It would be cruel and frankly impossible to keep Rihansh in a sterile bubble all his life, so the only solution to save him from succumbing to an infection like the flu is a bone marrow transplant. The search for an HLA-match proved futile. For over a year, everyone in the family was tested, and the doctors also tried to find other donors. As this baby boy is growing fast, it would be hard to keep him from being exposed to germs and even worse to keep him on life-time medication.
They decided it was time to try the only other option – a Haplo Identical Bone Marrow Transplant using the father as a donor. This requires a TCR Alpha/Beta depletion kit to prepare the father’s cells for transplant.

No income and a struggle for a good outcome

The cost of this surgery is estimated at Rs. 30,00,000, and Ramesh has been appealing to various funding sources as they cannot afford it. Ramesh was the sole source of income which has stopped for over a year since he quit his job to save his son. The family has been staying in Bangalore with their relatives, and all their expenses including the elder son’s education are being supported by a fund pooled together by their immediate relatives.
Your contribution can help Rihansh get the surgery he immediately needs to save his life from slipping away. 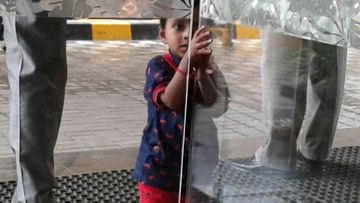 You Can Help Rihansh Get a Life-saving Surgery

Your support can save Baby Rihansh get a life-saving surgery.