Shares
Shares
Share on whatsapp
Rihan is just 5-years-old but he is already aware of the painful treatment that is keeping his cancer away. He tries to control his tears because he knows if he did, his mother will cry too. Reema tries to comfort him. But there is nothing much she could do than watch her son go through it, hoping that his pain will go away. Things have gone worse lately and Rihan is in his final battle. If Reema and her husband Mubarak cannot afford his treatment, Rihan's life will be in danger.

Medicines failed to cure this 5-year-old

Rihan grew up very active and happy; he showed absolutely no symptoms of being ill. In 2016, after being down with fever for a long stretch his family took him to a hospital. He was diagnosed with a weak case of Dengue. Medicines did not help him.
In November 2016, Rihan was diagnosed with Acute Lymphoblastic Leukemia, a type of cancer that starts from the early version of white blood cells in the Bone Marrow. If not treated, the disease can progress quickly and prove to be fatal within a few months. As heart-breaking as it was, Mubarak and his wife Reema did all they could do within their power to help Rihan fight cancer.

The family of three waits for Rihan's recovery

Mubarak quit his job and decided to move his family to Bangalore, with the help of family and friends. He dedicated every single minute to his son’s therapy and recovery. In June 2017, Rihan had finally defeated cancer and was on his way to lead a normal childhood.

“We had loans on our heads and I am the sole earning member of the family but we were happy that our son is cured.”

Rihan with his parents and sister, Reeba

Parents were devastated when cancer relapsed within few months

Follow-up appointments showed no signs of cancer. Rihan was doing well until December 23, 2017. But after a small fever raised doubts, Mubarak got Rihan back to Bangalore to get additional tests done. Unfortunately, Rihan’s tests showed the recurrence of blood cancer and this news completely shattered Mubarak and Reena.

“We don’t even have the money to get any tests done. Nowadays, Rihan is very nervous, silent and his body has changed too. He doesn’t even play anymore.” - Reema

He needs a Bone marrow transplant at the earliest

Rihan urgently needs to start the treatment but Mubarak and Reema have absolutely no financial means to support him. After quitting his job to be by Rihan’s side, Mubarak has had no income for over a year. In addition to that, they also have a 2-year-old daughter, Reeba, who needs attention as well. The cost of the treatment is 33 lakhs.

Reema cannot imagine a life without her son. It breaks her heart to see her son in pain. As time is running out, the only way to save him is by completing the treatment and the transplant. If we could come forward to help Rihan, he could be saved.

Funds raised through this fundraiser will support Rihan's crucial treatment. 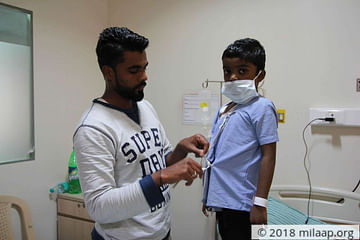 Help 5-year-old Rihan to get cured of cancer

Rihan has been suffering since 2016. This could be his last chance to stay alive