You are sending a message to
Support Life
Go back

Ravi Kumar sits at home, listless. His wife Kaamini, tends to him, barely able to mask her grief. Ravi has been diagnosed with large B-cell lymphoma, a form of blood cancer.

Ravi is 41 years old. He and his family live in Rampur, a district in the State of Uttar Pradesh. Ravi lives with his family, who consist of his elderly parents, his wife Kaamini, and their ten-year-old son. Ravi was employed as a sales executive with a pharmaceutical company in Rampur – his routine consisted of distributing medicines to medical shops across various villages. Kaamini was employed as a teacher in a local school. Their combined income was around Rs. 8,000, and with this, they managed to take care of their home and family members.

In October 2014, Ravi developed jaundice. However, as an illness that should subside with medication and treatment, it took Ravi and his family by surprise when it refused to abate. Worried, he went to the doctor, to get himself tested for any other disease he may have.

The family travelled to Bareilly to visit a hospital and diagnose Ravi's condition. A quick CT scan brought devastating news for Ravi and his family – he had been diagnosed with an advanced stage of large B-cell lymphoma. He had to start treatment immediately. 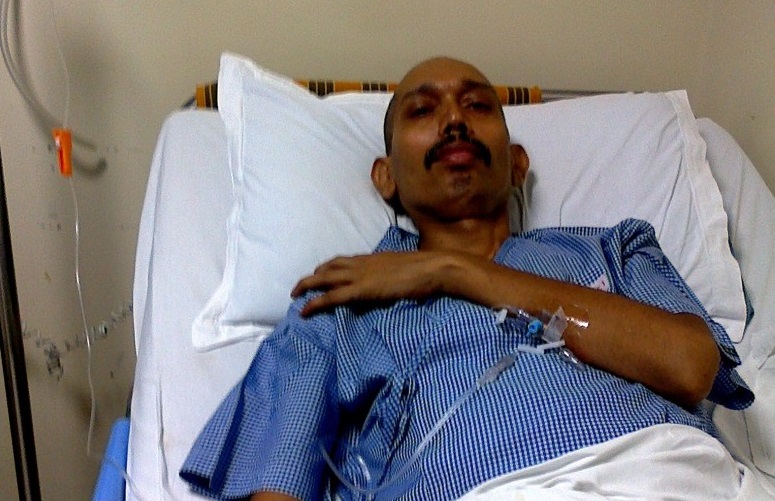 Ravi has had to quit his job to receive treatment for his condition. As no one else in the household can take care of Ravi, Kaamini has had to quit her job as well. With both earning members of the family being unemployed, the household's income has been completely cut off. Their son is currently attending school; however, with the family facing a financial crunch, his fees have not been paid for the last few months. Adding to the family's woes about Ravi's condition, there is the looming prospect of their young boy being asked to drop out of school because they can no longer afford his fees.

They haven't received help from anyone

The family has to travel over 200 kilometres, one way, every time to Rajiv Gandhi Cancer Institute in New Delhi for Ravi's treatment. Unable to travel so frequently, Ravi is currently at home, undergoing medication. One round of chemotherapy has already been finished. The family has already spent around Rs. 5,00,000 so far on Ravi's tests, treatment, medication, and the travel to the hospital in New Delhi. They have had to sell everything possible to fund his treatment, and have had to take loans. None of their relatives or friends have come forward to help; Kaamini laments that they haven't even enquired on how he is doing.

Kaamini speaks of her husband with tears in her eyes, “The 15 years we have been married have been wonderful. He's the kindest person I know. He's only interested in his job, and his home; he has no worrisome habits. He takes such good care of the rest of us.” He's currently under medication; his next round of chemotherapy will be done only after gauging his reaction to the medication. The family is desperately looking for help with funds for Ravi's treatment. Any support from you goes into saving Ravi's life.

Click here to learn how you can help save Ravi's Life