Unable To Even Feed Her, This Papad-seller Pleads The Internet To Save His Daughter's Failing Heart | Milaap
loans added to your basket
Total : 0
Pay Now

Unable To Even Feed Her, This Papad-seller Pleads The Internet To Save His Daughter's Failing Heart

“We are so poor that I’m finding it hard to feed both my kids. When we were told that only a heart surgery will save her, we have been worrying day and night because I, simply, cannot afford to pay for such a surgery. We’re going through an extremely difficult time and I hope she gets to live on.” – Kamal, Rasheetha’s father

20-year-old Rasheetha’s parents cannot afford to take care of her. She has been living with her maternal uncle, for about 6 years so that she could, at least, eat everyday. She was born with a hole in her heart which was treated with medicines but now, she’s suffering from a severe heart disease and her heart can fail soon if untreated.


She needs a corrective heart surgery within the next 15 days, and with barely any time left, her family is finding it extremely difficult to save her.

90% of Rasheetha’s major artery is blocked

“The doctor said that only 10% of the artery is open for the blood to flow. This has increased her blood pressure. She’s only 20 and her blood pressure goes up to 180 sometimes. This is the first time this is happening to any member of my family and I’m so worried about how she’s going to get better.” – Kanchama, Rasheetha’s aunt

Her major blood vessel is blocked, and it is getting worse from her birth

Just about 3 weeks ago, Rasheetha was experiencing severe pain in her neck and would get breathless even if she took a few steps. After a few check-ups, to her family’s horror, it was revealed that she was suffering from a severe heart defect known as coarctation of aorta.

In simple words, her aorta, the major artery which supplies oxygen-rich blood to the rest of the body, has become so narrow that it’s only 10% of its original size. With time, it is only going to decrease and cause her heart to fail.

“A few months after birth, we got to know about the hole in her heart. A lot of medicines and injections were given to her and when she was around 7 we were told not to worry anymore because it had healed. But, she hasn’t had a normal childhood. She has been very weak all her life. She barely has any stamina. She never played around or did any of those things. It’s just so difficult to even hear that only a surgery can save her life now.” – Kamal

Rasheetha is so bright and wants to study further

The 20-year-old secured an 85% in her taxing and accounting vocational courses. She wants to pursue a degree in a good college but her condition is making it hard for her to even apply to colleges.

But, she can only pursue her dreams once she gets a heart surgery first. Rasheetha’s heart is getting weaker by the day and if left untreated, she won’t survive for long.

Rasheetha’s family is running out of time to save her

Rasheetha’s father, Kamal, works as a papad seller and earns a tiny sum of Rs. 300/day. With this he is finding it hard to even feed his wife, Geeta and a younger son, Akshay. Her uncle, Santosh, works at a general store and earns around Rs. 600/day and has 2 other kids to feed too.

Rasheetha has spent around 3 weeks in the hospital and her father borrowed around Rs. 20,000 to pay the bills. He has no savings and is hopelessly running out of options.

To survive, Rasheetha needs an urgent corrective heart surgery which would cost around Rs. 3.5 lakhs in total. Her heart’s condition is worsening every day but her parents and uncle, combined, cannot afford even a fraction of the cost.  Now, they need your help to save their daughter.

Your support and contribution will save 20-year-old Rasheetha and help her live a normal life after suffering for years. 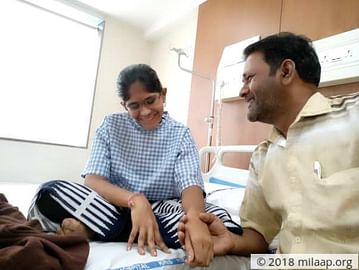 Rasheetha Can't Even Take A Few Steps Without Getting Tired

Slowly, Rasheetha's heart is giving up and dying. Her family is restless to save her.

UPI: givetokamal@yesbankltd (Copy to clipboard)
Or
Click here to read the instructions before you make a bank transfer.