My Baby Was Born 3 Months Premature And She Is Struggling To Survive | Milaap
loans added to your basket
Total : 0
Pay Now

You are sending a message to
Ambika R
Go back

Shares
Shares
Share on whatsapp
I am Ambika and I got to know about my pregnancy in the month of January. For four months after that, everything was quite good. From fifth month onwards, however, suddenly my blood pressure started rising to an unhealthy level. Hypertension is pretty normal when you’re pregnant. But suddenly I started swelling all over my body. It was so severe that it became unimaginable by our gynecologist, she sent me to a physician. Initially, I admitted to good 4-5 days. Post the discharge from the hospital, I was all fine for two weeks until my condition got even worse.

After undergoing multiple tests, I found out two things: First, the fluid that was inside the uterus has almost dried up and my umbilical cord was getting narrower day by day because of which my baby wasn’t getting enough nutrients. So, I started rushing to multiple doctors for consultations. Everybody told me to terminate the pregnancy since the condition was such that the baby could die at any moment. Only good thing was, the pulse rate of the baby was very strong. But we couldn’t only consider the present. I didn’t want to gift my baby a life of abnormalities and suffering. We decided to go ahead and terminate the pregnancy.
When I went to my gynecologist, instead of terminating the pregnancy, she referred us to a neonatologist. He gave us some hope and we hang onto it with all might. The baby was small and we were killing it. I didn’t want that. The neonatologist told us to pull the pregnancy for 15 more days to see if the weight of baby increases. But eventually, things didn’t work out there. My neonatologist quit one fine day and I was all by my own. That is when I took a call to go to Surya hospital. I was admitted to the hospital on 5 July 2017 and that very day my baby was born; 3 months premature. The doctors had to rush the pregnancy because even a minute longer in my stomach would have killed my child. My baby was born only 460 grams and had to be NICU.

“Every call from the NICU was a life threat to us”

It was very difficult time for us. My baby was so tiny and suffering so much. Every call we used to get from the NICU was a life threat to us! My baby should’ve out of me long back. She wasn’t even getting any nutrients from me. It was her will to live that brought her into this world alive. From day one, she’s been only fighting. She fought from 460 grams to 1490 grams, however, she still has a lot of issues, especially with her lungs. She is unable to breathe on her own. She also her severe conjunctivitis. The doctors say that it will take more 4-5 weeks for my baby to get better.
Financially, we are lagging. So far, her hospital bill has reached o Rs 12.5 lakhs. Given that my baby will require additional weeks to get better, the bill keeps mounting. I am a homemaker and my husband works for a hotel in Goa. He earns Rs 22, 000 per month and I already have a son who is in class 7. We have to take care of his schooling as well.
Nothing had prepared us for this. Whatever saving we had, we used it up in payment of my baby’s medical bills. Now we are left with nothing. And without the money, I won’t be able to save my baby. I couldn’t help my little one while she was inside me, I just hope I don’t end up giving her the same fate when she is outside.

Your support can help us save our baby girl. Her birth was supposed to be a happy occasion. Before we knew it, life swept us into this nightmare. Funds raised through this fundraiser will help to keep my baby alive. 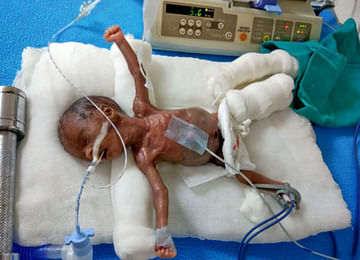 This baby was born extreme premature and needs our help to survive.

Help Me Save My Baby Girl.