V
You are sending a message to
Vinod
Go back

Help This Couple Save Their New Born Baby

Shares
Shares
Share on whatsapp
Vinod Jadhav has lived in Mumbai all his life. This is where he had spent his childhood, grown up in his parents' house, studied and kickstarted his career. In 2012, he got married to Anshu, a girl from Andheri, Mumbai. Life was rosy for Vinod - He had married the girl of his dreams and did what he loved - a video editor in a promo studio in Santa Cruz, Vinod could not be happier. Mumbai was indeed the city of dreams.

Life took a sharp turn for Vinod and Anshu

Vinod and Anshu were eager to start a family,and were overjoyed when Anshu was pregnant with a child, in 2015. Months went by. Vinod would finish work by 7pmeveryday and make sure that he was available for all the ultrasounds, scans and other tests that his wife Anshu was required to take.

The due date was fast approaching. The night before Anshu was due to give birth, she experienced severe pain in her stomach.

"I remember one night, Anshu started having extreme pain in her abdomen. Worried and flustered, I rushed her to the hospital. We were asked to sit there. Upon checking, and a few tests, I still remember the doctor's words. Our baby was no more. It had died inside," - Vinod Jadhav

Vinod and Anshu carried on with their lives, hearts heavy. Every day was a challenge- Getting back to normal life was hard. But they had each other and helped each other get through the day, every day.The couple decided to try again for a baby.

Vinod continued his job as a video editor, and Anshu, a home-maker. Soon, Anshu was pregnant with a child.

The couple was keener than ever to ensure that all tests were properly done, and that extra precaution was taken. At every step, the couple ensured that everything was smooth.

On the night of January 4, 2017, while the couple was enjoying a peaceful dinner, Anshu started experiencing extreme pain in her abdomen again. She knew this pain. She had experienced this pain before, two years ago.

Vinod rushed Anshu to the hospital immediately. The doctor there had told her that these were gastric pains, but Anshu refused to accept this.

"She had experienced the same pains before. She knew that it was not a gastric-related problem," said Jadhav.

Soon, upon consultation with a few senior doctors in the same hospital, Anshu was admitted immediately for delivery. She was to undergo a Caesarian(C-section) surgery to deliver the baby.

The couple welcomed their new born into the world. Baby Vihaan was born. The baby was born 3 months in advance. He was due on April 4, 2017.

Vihaan has been in the ICU for the last 3 months

"Our child is extremely premature. But now, we have a chance at saving him. Earlier, there was no chance, no way to save our child. Now there is some hope."

Vihaan has got chronic lungs and a swollen liver. His stomach is swollen as a result of this. The doctor at Surya Hospital has said that the swelling would reduce in 5-6 months.

Vihaan underwent a Bone Marrow Transplant, the first time on a newborn in 3 years. Doctors have performed a liver biopsy on the baby. Due to an infection in the liver, he is being given soya milk, as lactose can cause the infection to increase.

"There was a time when Vihaan's breathing tube did not help. He stopped breathing. That was the most terrible moment in my life. He was doing fine, and all of a sudden, he had stopped breathing. He was put back on ventilator and is stable now. I felt like I had almost lost my son,"-Vinod Jadhav

Baby Vihaan has been on the ventilator for the last 10 days and has been diagnosed with jaundice. He has undergone blood transfers 15-20 times so far. His platelet count is 73,000, half of what it is supposed to be.

Vihaan has a cataract in both eyes. His right eye was successfully operated on. The operation for the left eye is due in a few weeks.

Vinod and Anshu need your support to save their baby. Help this couple save their son.

Click here to help this couple save their newborn baby 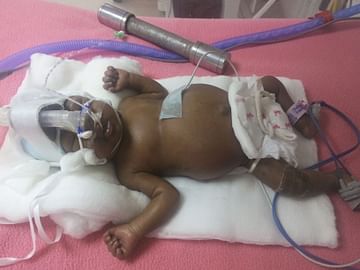 Vihaan is an extremely premature baby.His parents need your help to save their child.