This 5-year-old Would Not Have Survived If It Wasn't For An Emergency Transplant, Now Help Settle His Medical Bills | Milaap
loans added to your basket
Total : 0
Pay Now

DA
You are sending a message to
Dr Ashley
Go back

This 5-year-old Would Not Have Survived If It Wasn't For An Emergency Transplant, Now Help Settle His Medical Bills

Shares
Shares
Share on whatsapp
5-year-old Prahlad Umesh Balaraddi was the life of the house, never having fallen sick even a day in his life. Unfortunately, things took a turn for the worse a month ago when an infection blew into an Acute Liver Failure and he needed an Emergency Liver Transplant to make it out alive.
This story has been written from Prahlad's father, Umesh Balaraddi's perspective.

We are a small family - my wife, two little boys and I. Yes, we do have extended family back in the town, but once I got married, we decided to create our own little world. We stay in a humble home in a town close to Hubli where I work as a Product-in-charge in a factory. I earn about Rs. 30,000, and that is more than enough for household expenses, putting the children through school, and leaves us some more for the future.
Prahlad is my younger son. He is like a pataki. Always bouncing around the house, playing with his brother and friends. He completes our family. We never really had to take him to a doctor before. He was not the kind of child who fell sick. One day, early this month, he had a fever and cold. We consulted at the clinic nearby. They prescribed antibiotics and said he would be better in a few days. A week went by, he got worse. The fever did not subside. We had him admitted to the hospital. There also they ran blood tests. We heard doctors diagnose a lot of things - malaria, dengue, and more. Ultimately, he kept getting worse.

My wife and I couldn't see Prahlad's condition deteriorate like that in less than two weeks. My son had gone from being a happy bouncing ball to just lying there unable to explain how he felt, afraid of the needles that were attacking him every now and then.

We brought him to Bangalore and admitted him to NH when we understood it had something to do with the liver. The doctor evaluated Prahlad and immediately said we had to rush him for a transplant. We barely had the time to get the money ready for the tests and the surgery itself. At first, they took him into the PICU. Then, spoke about getting the donor ready. I was not a match. We hoped my brother would be, but before that my wife volunteered.

We don't want to stop or think about risking our health. All we want is to save our child.
As soon as the tests were done and results found the match, my wife and Prahlad were rushed into surgery. I've already seen the effects of a kidney surgery, living without one, and how long recovery takes. I couldn't bear to imagine the pain my wife and child would be going through.

We would have lost Prahlad if they had not rushed him for surgery. I'm thankful they did not think about the money before saving his life.

Regardless of what I have saved during these years, the expenses that are mounting, make me feel like the deprived person from a small village like I was long ago. I have spent lakhs already, and need more now to care for both my son and my wife. We do not have anyone to help us through this situation. We could not wait long enough to arrange for funds, we would have lost our child. I hope you can understand the predicament we were under.

These expenses are now piling up, and we request you to help us fulfill the bills that saved our son. I'd be forever grateful. Someday, when anyone you know is in need, I'd be there.

The surgery just ended. He's still sedated. Doctors say they can tell us about his state only after 48 hours. There's a long road to recovery ahead of us. Your contribution and faith will mean the world to us.
The specifics of this case have been verified by the medical team at the concerned hospital. For any clarification on the treatment or associated costs, contact the campaign organizer or the medical team.

Click here to contribute to Prahlad or for more details on this campaign.
Donate 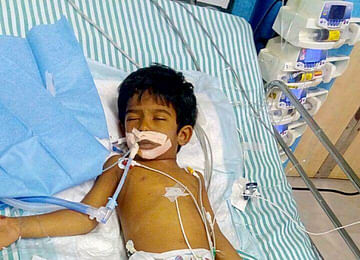 Prahlad was admitted for Acute Liver Failure. He needed Emergency Liver Transplant and his...