Nihit Has To Be Kept Sedated So He Doesn't Feel The Pain Of His Condition | Milaap
loans added to your basket
Total : 0
Pay Now

“To see your child flail his limbs helplessly, eyeballs rolled back and lips twisted and frothing, is one of the worst things that can happen to a parent. And we saw Nihit go through that agony in intervals of barely 2 minutes.”

Maheswara, 8-year-old Nihit’s father can’t talk about his sick child without choking up, that’s how upset he is. When your child is fine until one day and then gets admitted to the ICU, what can a parent do, but cry?

It started with a fever. Nihit came back from school and looked really dull. His parents took him to the doctor who prescribed medication. They were told that he would be fine in 4-5 days. But despite the medicines, Nihit’s temperature didn’t come down and he continued to weaken.

“He could not eat even half an idli. We kept trying to get him to eat but he just couldn’t. He had become so weak, that he couldn’t stand without support. I was going to take him back to the doctor the next morning for the fever, but what I saw the next morning almost took my life.”

The doctors at the ER admitted him to the PICU without further delay and put him on stabilizing medication through intravenous drips. But despite all the care and attention, he started having frequent fits since that evening. He would violently convulse every 2-3 minutes, and the doctors couldn’t do anything to stop it.

In the meantime, the neurologist arrived and prescribed various evaluations, including a CT scan for the brain, and EEG. When the test reports came, he suspected Nihit to have Auto-Immune Encephalitis - a condition which could be causing the convulsions.

The doctors at the hospital in Tirupati told them that their hospital lacked the facilities to treat the condition and that he should take Nihit to Kanchi Kamakoti Childs Trust Hospital, Chennai right away. When Nihit arrived there, he was taken to the ICU immediately and he had to undergo a few more tests, including the MRI scan to see what was wrong.

They confirmed the diagnosis made at Tirupati and started treatment right away. To prevent Nihit from hurting himself and losing strength due to the fits, he has been sedated. Even now, Nihit gets frequent episodes of fits. But thankfully since his treatment has started he is making progress, albeit slowly.

Nihit’s parents and his older brother Dikshit are going through the toughest time of their lives. Since Nihit has been hospitalized, his friends keep asking Dikshit about him and he, in turn, keeps asking Maheswara about what happened to his little brother. Since they don’t want him to worry, they tell him that Nihit has high fever and needs to stay at the hospital.

Every day Maheswara has to spend thrice his monthly salary

Maheswara and his wife Revathi are handling this crisis on their own. All they want is for Nihit to get better and discharged from the hospital, so they can all go back to their normal lives, leaving this bitter episode behind. But financial constraints are making it very hard for Maheswara to handle the situation.

“Everyday I have to spend more than thrice the amount I make in a month. I don’t know how to arrange money any more. I have borrowed money from everyone I knew, none of them can help me anymore.”

Nihit’s treatment at the hospital costs around Rs 30,000 a day. That amount is getting very hard for Maheswara to arrange. He works a teacher in a local private school and earns a meagre income. So far, for the treatment, they have spent over Rs 7 lakhs, which has exhausted them of their savings and made them borrow money from everyone they knew.

In order to save Nihit, Maheswara and Revathi need your help. Only your contribution can save their little boy and bring back joy into their lives. 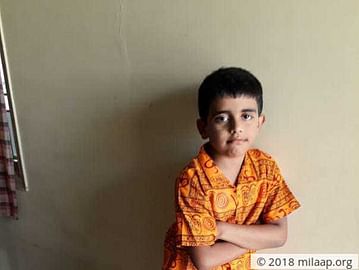 Nihit has auto-immune encephalitis and is in a critical condition in the hospital.