N
You are sending a message to
Narmadha
Go back

For this national champion social work is more important than money

Shares
Shares
Share on whatsapp
The hopes of her coaches rest on 14-year-old Pavithra. With less than an year's practice, she stands out with her stance, footing and style as good as a 'pro'. She is always on time for practice – two hours every morning and evening. “Practise is the best part of my day. Coach is sure I can box at the Olympics one day,” says the bright-eyed girl.
Pavitra is one of the 100 girls from the corporation school learning boxing from a dedicated group of young women sportspersons in Chennai. Reverently called 'coach' Narmadha and four of her friends from boxing have dedicated themselves to guiding these budding boxers. In groups of 30, the girls practice on the sand and share 5 gloves between themselves. Filled with confidence, these children dream of the various championships and opportunities they now have thanks to boxing. 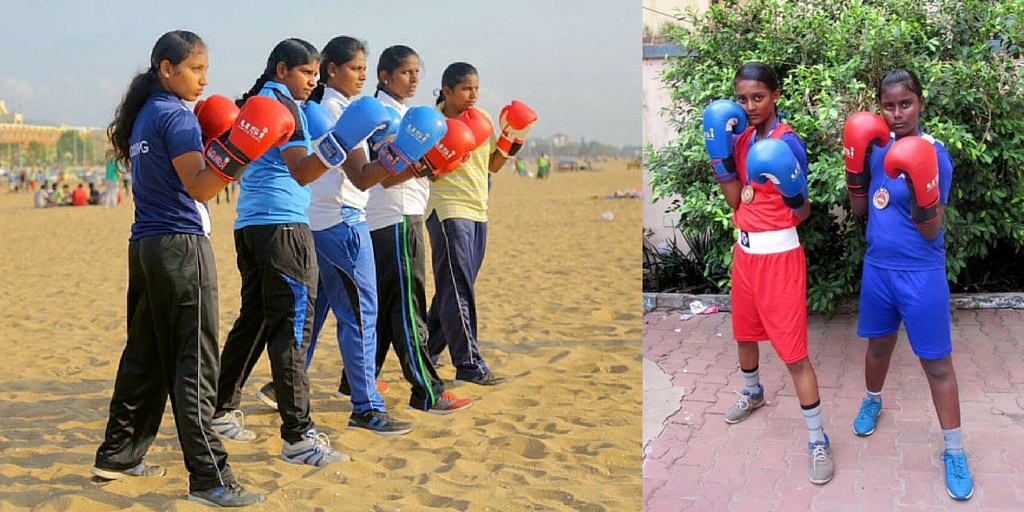 (Left) Girls practise on the beach; (Right - L to R) Narmadha's students Pavitra and Shalini in their defensive stance
J. Narmadha experienced first hand the exhilarating change brought about by boxing. She began boxing at 12 in 2006. A student in Chennai Corporation School, she was one of the few that was picked for 'boxing'. She bagged gold at the state-level the same year and the following three years, being named 'best boxer' in the Tamil Nadu. She also won two bronze national medals in 2007 and 2008.

Learning from a stellar coach
However, due to her limiting circumstances, Narmadha was never able to become a professional. But she made sure she learnt enough to become a physical education instructor. “Boxing changed my life. I won medals and may parents and teacher saw me as a champion. But there was nobody to teach us better techniques or even tell us what to do next. I decided that even if I couldn't, I would help others girls like myself become boxers,” adds Narmadha.
She works with the NGO Magic Bus to bring sports into the lives of underprivileged children. She works as a gym trainer in the morning to make some money. “I don't make much, but if I can give these children a chance for glory, it is worth it,” she says.
A mentor who understands what the girls need
Like Narmadha and her friends, the girls are daughters of daily-wage workers and for Narmadha, their success is her own victory. She understands the challenges faced by her charges – no financial support from home and lack of nutritious foods that athletes need. No one has ever told these girls that they will amount to anything.
Narmadha (Left) with a student
So they are trained free of cost. What they lack for in funds is made up for in fighting spirit. Narmadha and her friends put in their own money and purchased 5 boxing gloves. At practise time, the children who get the gloves spar and the rest exercise, punching the air and improving their defensive stance.
With some encouragement they can make a mark
Slowly, the Chennai girls are carving a reputation of being tough go-getters on the rink. With a little bit of encouragement, these girls are daring to dream big and make a splash in the state tournaments. With slightly better facilities for practice such as more boxing gloves and punching bags, they can definitely prove their mettle.
Narmadha is raising funds for purchasing boxing gloves, punching bag, mouth-guards, head-guards and bandages for her students. A small contribution from you can give the spark of opportunity to underprivileged girls. Donate here.
Click here to contact the organiser.
Donate

These girls are dedicated and determined. Help them with a small boost in their efforts