This Sweet Seller Is Desperate To Save His 7-Year-Old Who Can't Eat Because Of Cancer | Milaap
loans added to your basket
Total : 0
Pay Now

“When the doctors in Kolkata promised us they would call us back with Monishi’s blood reports, little did I know that this would make our worlds fall apart. They told me, ‘There's no time to waste. Monishi has cancer and without urgent treatment, it will be the end for him.’ Cancer has been after our lives since then,” Nirmal, Monishi’s father.

7-year-old Monishi had just stepped into Class 1 when he suddenly started vomiting whenever his mother, Sudipa, would feed him. In a few days, he developed high fever and was even coughing abnormally. The local doctors gave him pills that kept his fevers away for a fortnight, but it came back with greater force.

“My child had stopped eating or playing. Suddenly my once-so-active child barely had the strength to irritate his mother with his naughtiness. I knew something was not right. I took him from Durgapur, West Bengal to Kolkata. I was half-heartedly expecting that there isn't something to worry about. But, the doctors said he has acute lymphoblastic leukemia, a severe form of blood cancer.”

Even after a year of chemotherapy, Monishi's sufferings have only gotten worse

Monishi has stayed in the hospital for almost a year undergoing chemotherapy. The doctors are fighting every day to save the child who has no idea what is wrong with him. His parents have convinced him that he will be a strong man one day only if he goes to hospital now.

“The only thing that has kept me going is the fact my little child is responding well to the treatment. I can’t stop his treatment at any cost because that will mean I will fail to keep my son with us. He still refuses to eat because he doesn't want to vomit. Cancer has made him very weak. He will become better only with chemotherapy for another 6-8 months.

Monishi will not be able to go to school for at least another year. He asks his father to teach him because he thinks he’ll not become a big man otherwise. This child does not realise that he may not even be alive that long. Cancer has wiped off the smile from this child’s face and his parents are desperate to bring it back.

“I don’t care if I have to sleep for another year in the hospital corridors. My wife has forgotten to smile or eat or sleep. She keeps on crying while sitting in front of the idols hoping that her prayers be answered. Nothing seems to help now. But even I am determined to save him with my life and not lose to cancer.”

For the uneducated parents, all they know is their child deserves a chance to live. Nirmal sells sweets in front of a Kali temple and barely manages to earn Rs 3000-4000 per month depending on the business he gets every day. He was somehow managing the necessities of his family until his son had cancer.

“Spending more than 20 times of what I earn in a year, has been the toughest. By borrowing from relatives I have somehow managed to spend Rs 10 lakhs so far. I, no longer, have anything to save my son. But without the necessary chemotherapy, we will lose Monishi forever.”

7-year-old Monishi is suffering from blood cancer. Instead of playing around, he has been forced to stay indoors and lie on the bed. He needs several cycles of chemotherapy to get better. The cost required to save him now is Rs 6 lakhs and his father has nothing left to save him.

Your support will save his child. 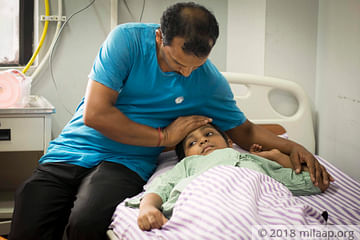 This 7-year-old cannot win against cancer without help

Vomiting every time that he eats, Monishi will not be able to fight his cancer without urgent help.

UPI: givetonirmalgiri@yesbankltd (Copy to clipboard)
Or
Click here to read the instructions before you make a bank transfer.