You are sending a message to
Sandeep Dixit
Go back

After 7 failed hip surgeries, this biomedical engineer needs your support to walk again.

Shares
Shares
Share on whatsapp
28 Year old Monish Jawle could be an accomplished biomedical engineer, he used to help in saving lives and was one of the best in performing robotic surgeries. There was a time he used to work with more than 80 surgeons across Mumbai and had dreams of having a career full of accomplishments and contentment by saving so many lives.

However after undergoing 7 agonizing surgeries, in the last 8 years and spending almost 20 lakhs on his treatment. Monish's future looks dark and full of struggles. Monish is bedridden now and whenever is tries to stand a series sharp pain surrounds his lower half of the body. With all those surgeries Monish has now a shortened left limb, which has left him crippled for his whole life. All of this is due to a serious hip injury which happened due to an unfortunate accident in 2009.
Monish now requires your support to fund his treatment and hopes to end this never ending cycle of painful surgeries.cycle of painful surgeries.

I was extremely tired that night. I had worked for 23 hours non-stop.

This happened in 2009, Monish was in 3rd year of his Biomedical Engineering course. With his hard work and a bit of luck he got an internship in one of the biggest civil hospitals in Mumbai, The KEM hospital.

"I loved my job and used to work extremely hard and was always excited about my work"
On the night of 3rd October. I had completed a grueling 23-hour shift and was planning to go to my friend's place and crash. My friends had come to pick me up."

"It was 3 am and I was driving back to my friend's place on the highway, with one of my friends as a pillion, A dumper truck was driving on our side and was running high beam. For a moment due to the glare I was completely blinded and could not see the truck coming towards me from the wrong side. Once I regained the sight I saw it was extremely close to us. I put both the brakes of my bike as a reaction the bike skidded on the road. The driver of the dumper was drunk and almost crushed my bike and due to jerk offered by the truck, my friend landed on me. The sudden weight of my friend broke my hip bone and we both were left seriously injured laying on the highway."

One of my friends took a help from one of the passersby and took us to a private hospital in Kalyan. Initially, the doctors at that hospital tried to con us suggesting both sides of my hips were damaged, however since I am from a medical background I was sure that only one of the sides were injured for 3 days I spent at that hospital they charged me almost a lakh. I was finally discharged and my father took me to KEM hospital to ensure my treatment happens properly.

The 4th surgery called "wash wound surgery happened in Jan 2010, The hip had infections developed of the size of a human palm and on Dec 2010 another surgery to remove the infection was conducted. The 6th surgery was conducted in Nov 2011 to fix the joint with the help of fixtures and doctors had suggested Monish would be able to walk after the surgery,
however, when he tried standing on his on feet, due to a misalignment everything broke inside and another surgery was scheduled in the next 3 days.

Finally, team doctors were flown from abroad and an extremely expensive set of hip joint was replaced in the 7th surgery.

Once he recovered from the surgery, Monish put all his efforts in completing his graduation and finally after a break of 4 years, Mohnish graduated as a Biomedical Engineer in 2014.
After the graduation, he immediately took up a job at Medicon as a Biomedical Engineer and started helping his father to clear the financial debt due to his medical treatment, he worked hard and eventually ended up working for his dream company "GE Healthcare" with his hard work and dedication in three years he rose to a position of Senior Engineer.

"My father has gone through a lot and has supported me all these years, he managed medical treatment, my college education along with my younger brother's college education. I will never forget the pain and struggle he went through to arrange funds for everything"

"We lost my mom in 2002 when I was 14 years old, at that time also my father had huge debt due to my mother's medical treatment, he was young and paid of the debt that time, now he his retired and has exhuasted his pensioon fund to pay off the debt. I dont want to see him in debt anymore"

Everything was going well until last year, however, it seems the work took a toll on Monish's body and once gain the hip has been damaged.The current injury has left Monish totally bedridden and the only way to improve his condition is by undergoing another hip replacement surgery.

Monish has decided to not to undergo a surgery in the civil hospital since his last experience has been painful, agonizing and has only saw a partial success. He shall be going a surgery in a private hospital.

Monish requires a hip transplant in order to become mobile and to start living a normal. He is determined to make the best use of his life and wants to get back on his feet to achieve something in life.
Monish current surgery will cost close to 9 lakh rupees and the post-operative care will cost close to another 3-4 lakhs. The family has already spent almost twenty lakhs on his treatment and have exhausted all their funds to support the surgery.

Currently, the family expenses are managed by Monish's younger brother Nikhil who is a software engineer in reliance and manages to earn 20 per month.

Your support will ensure a young confident and determined youth get back on his life and save many other lives in future. 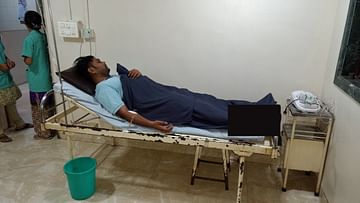 After 7 failed hip surgeries, this biomedical engineer needs your support to walk again.

28 year Old Monish Jawale needs to your support to undergo a hip replacement surgery one last...