Meet Saraswathi, whose shower walls used to be alive | Milaap

Meet Saraswathi, whose shower walls used to be alive

Shares
Shares
Share on whatsapp
When I went to visit Thangarani she was not available, so instead I met with another member of her group, Saraswathi. Saraswathi has two 24 year-old children, a twin son and daughter. Her daughter, the first-born, lives in a town about 80 kilometers away with her husband. Saraswathi’s son – unmarried – still lives in the house and works as an electrical engineer doing hard-wire networking maintenance.
Saraswathi’s family owns two houses that face one another. After a brief conversation near the village temple, she walked me between the two structures to the land bordering an agricultural field. Saraswathi received a loan last year to construct a toilet, and I was interested to see what she had built. Unfortunately, when we reached the area behind the houses, there was no toilet to be found. She walked me to a small area enclosed with walls of the branches and leaves of dead trees. There was no ceiling, and the flooring was comprised of flat rocks. There was a tub of water with cup inside, which looked like it was used for bathing.
Saraswathi said that although her family hasn’t built a toilet, they intend to start construction in the next two months in the bathing area. They have talked to a mason, and since only three people would be using the toilet, they could build a low-cost (15,000 Rs.) single-pit toilet that would last for 12 years. However, when we were talking about whether she had enough savings to build a toilet, there were a few neighbors within earshot, so Saraswathi was rather private about how much her family had in savings and about whether she still had the money from the toilet loan. Saraswathi seemed genuinely interested in building a toilet, although it remains to be seen whether she will be able to fund the construction or not. Due to the close proximity of the agricultural field to her house, I could understand why building a toilet may be less or a priority for her family than for others who don’t live as close to agricultural land. 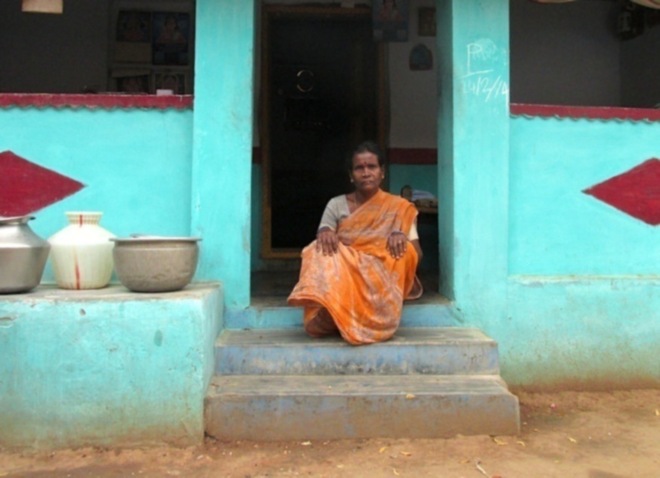