Help Marilyn Get Back Home To Her Daughters Again | Milaap
loans added to your basket
Total : 0
Pay Now

KV
You are sending a message to
Kalpana Vinod
Go back

Help Marilyn Get Back Home To Her Daughters Again

Angelyn and Adelynn, aged 9 and 7,are waiting outside the ICU doors to get a glimpse of their mother Marilyn. The girls want their mother to hug them tight, tuck them into bed,  and read them their bedtime stories. But little do they know that their mother is fighting for her life. Had Marilyn known that a ride to the railway station on a Monday morning would bring their lives to a stand still, she would've never stepped out.

40-year-old Marilyn Remedios slipped into a coma when she met with a horrible road accident on April 6th at around 5 am on the Mahim Causeway road, Mumbai,that left her in a coma. Marilyn, a home maker,was riding pillion with her husband Sheldon to catch a train home to Goa, when the tragedy struck.

The dark, deserted road gave no warning of the impending danger. Marilyn's thoughts were probably with her girls at home, imagining how they would run to her with open arms. Poor road lighting did not allow them to see the killer pot hole. As the pot hole jolted their scooter and brought it down, Marilyn fell hard onto the crater, suffering a major head injury. 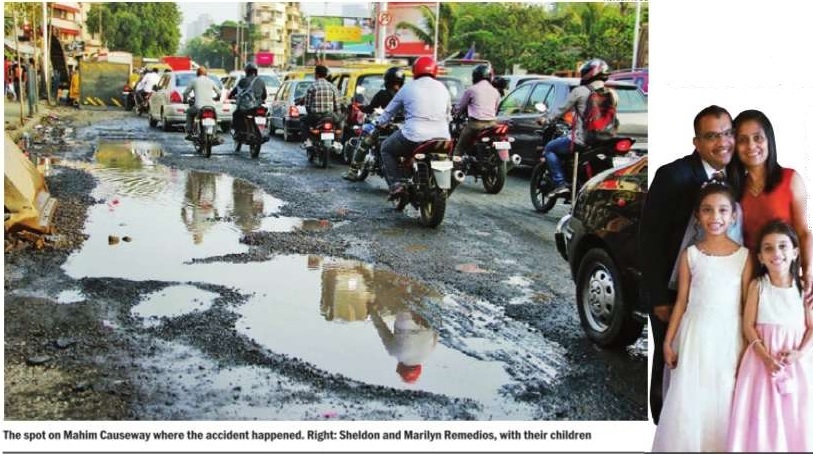 With no one around to help, Sheldon frantically made calls to their friends and family. He kept calling out Marilyn's name, but she didn't respond. Just when Sheldon thought he would lose her, a car came by and the occupants offered to help.

The Wait For Recovery

They rushed a profusely bleeding Marilyn to Bhabha Hospital,Bandra. Due to her critical condition, she was later transferred to Lilavati Hospital. Doctors identified a clot in her head,and she underwent surgery on April 8th. Marilyn remained in a coma post surgery for close to two weeks because of the swelling in her brain. She has now been taken into the stroke and Rehabilitation center where she will undergo rehabilitation for walking and stress. Any hopes of bringing Marilyn back to her children are pinned on the success of her full recovery.  Marilyn’s family has managed to raise some of this amount from friends and relatives for her treatment, but they still need a huge amount for therapy and medical expenses.

How Can You Help Marilyn

The cost of hospitalization and treatment are very high. Marilyn's family and friends have knocked at many doors seeking financial support. Kalpana, one of Marilyn’s friends, has set up a campaign on Milaap to crowd fund for Marilyn’s treatment. There is a need for Rs.10 lakhs for Marilyn’s surgery and treatment. Marilyn is coping well with the treatment now except for the stress that she's going through and is longing and crying to be home with her daughters .

Your contribution today will give back Angelyn and Adelynn their mother. Help Marilyn Recover Fully Soon. Every support counts!

Click here to learn how you can help Marilyn be back home with her daughters again.