Class XI Student With Rare Disease Has Weeks To Fight Death Because He Did Not Get Help In Time | Milaap
loans added to your basket
Total : 0
Pay Now

“We didn’t know he was living with it for 8 years. It started with fever and cough, and now his body can’t make enough blood to keep him alive. It’s so debilitating that with each day, a different part of his body is being affected."

When 18-year-old Manjunatha looks in the mirror now, he notices himself slowly becoming unrecognisable. The class 11 student was a sickly child, but when all his reports were normal every time Vrindamma and Maralasidappa took him to the doctor, they didn’t think much of it. His parents have now learnt that their son has a rare disorder that is not only slowly killing him, but also increasing his risk of developing other life-threatening diseases if left untreated.

For years, they didn’t know he was suffering from a dangerous disease

Ever since he was just 10-years-old, Manjunatha would feel an unexplainable tiredness every now and then. After a few days it would go away, but never permanently. Every time Maralasidappa took him to the hospital near their village in Davanagere, the doctors said his fever would subside in no time. However, 6 months ago, Manjunatha’s condition became worse when he came home from school, gasping for breath.


“All these years, he’s only been on medication for fever, when his condition is far more dangerous. He’s only getting worse now. For 8 years no one could tell us what was wrong with our son. Now his skin has completely changed. He has patches everywhere, and he catches an infection every two days. He starts coughing continuously and then struggles to breathe.”

This dangerous condition does not just change his face and nails, but also kills

“He’s a very simple boy. He doesn’t ask for much. He’s always good to everyone and keeps to himself. Even when he used to fall sick as a child, he never complained. Sometimes, I can’t help but blame myself for this. Maybe if I was educated enough, I could’ve realized that something was seriously wrong with my son much sooner. But when the doctors were not able to tell me, what could I have done?”

Manjunatha's parents can’t afford the treatment on Rs. 150 per day

“Now that we’ve found out what has been causing him all this pain, we still can’t rest. The only thing that can save him is much more than what we can ever afford. We had to borrow money to even take him to Bangalore for tests. My wife and I both earn around 150 per day by farming on other’s land. We have no savings. 12 lakhs is an unimaginable amount for us.”

A bone marrow transplant can save Manjunatha, but Maralasidappa and Vrindamma still can’t breathe a sigh of relief. Despite toiling away on the fields, day in and out, they can’t even afford the next checkup without knocking on the doors of their neighbours and family members. Manjunatha’s questions about when he’ll be alright again are only met with silence now.

Manjunatha’s rare genetic disorder is worsening his condition each day. Manjunatha can stop living a life of pain and fear with a bone marrow transplant. It can save his life, but his parents can’t afford to give him the life-saving treatment.

You can help Manjunatha get the timely treatment he needs and save his life. 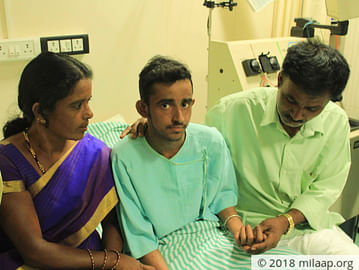 Illiteracy Got In The Way Of Manjunatha's Recovery

His body is unable to make blood, while his body is crumbling every day. Your support can help him.