This Bus Driver Is Struggling To Save His 4-Year-Old Son From A Disease That Could Take His Life | Milaap
loans added to your basket
Total : 0
Pay Now

Shares
Shares
Share on whatsapp
Manikanth is only 4-years-old but has spent the last 3 years of his life going to the hospital every month for blood transfusions. Manikanth has a serious blood disorder that can turn fatal at any moment. He’s usually a cheerful child, but the mere sight of a hospital scares him, and he starts crying. Manikanth asks his parents every day when he can stop being poked with needles, but it's the only thing keeping him alive. He can be saved with a bone marrow transplant and his father, Parashuram, is willing to do anything to give his child a pain-free life, but years of treatment expenses have left him struggling to find a way.

A year before Manikanth was born, Prashuram and Sita lost their first child even before they could bring the baby into this world. The loss left them hopeless and depressed. They had spent weeks planning for a life with their child, but fate had other plans.

“Manikanth’s birth was the happiest moment of our lives. After the loss of our first child, we never thought our family would be complete again. A few months after his birth, we were happy to see that he was growing up like any healthy baby. Our fear of losing him was slowly fading, but when he was 1-year-old he started falling sick every other day and we found out he had a deadly blood disorder.”

Manikanth ran a fever every 15 days. Just when his parents thought he was getting better, he would only get a fever worse than the last time. Worried, they took him to a doctor only to be told about a fatal disease that they had never heard of before – Thalassemia. In this condition, the body destroys red blood cells instead of producing them, making the person severely anemic.

Little Manikanth has only known pain all his life. Ever since his diagnosis, Manikanth has been going to the hospital every month for blood transfusions. It’s the only thing that has kept him alive for so long, but now that’s not enough.

“At home when we see him running around and playing, for a minute we forget that this can all be taken away from us if we can’t continue his treatment. No matter how hard we tried, we could never give him a normal childhood. The threat of losing him was always upon us, even though he’s oblivious of it.”

A bone marrow transplant can save Manikanth's life. The donor will be either parent. While they were relieved that they have a chance to save their son, they don’t know how they can afford it.

Three years of continuous treatment and monthly transfusions has left a hole in Parashuram’s pocket. Despite taking loans, he’s still not sure if he can afford to pay for his son’s transfusion the next month, let alone afford 36 lakhs for his bone marrow transplant. Nevertheless, Parashuram hasn’t given up.


“Every month we pay at least Rs. 7000 towards his medical bills. I’ve been spending a portion of my salary for his treatment for years now and I haven’t been able to save a single penny. So every day is a struggle for us. I’m only a BMTC bus driver. I can't afford so much, even though it's the only thing that can save him now. I want to give my son the treatment he needs but I’m struggling.”

Manikanth needs an immediate bone marrow transplant that can save his life. He has been living with a severe blood disorder for 3 years now and can’t go on any longer without a transplant. Parashuram is a bus driver and can’t afford to pay for his treatment any longer. His only hope now is for someone to lend a helping hand to save his son.

Your support can save little Manikanth’s life. 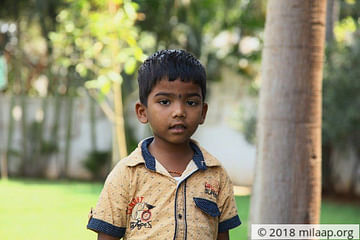 Manikanth has a fatal blood disorder and needs your help to get a life-saving surgery.