This School Teacher Is Running Out Of Time To Save Her 4-Month-Old Baby, Who Is Suffering From A Severe Heart Disease | Milaap
loans added to your basket
Total : 0
Pay Now

This School Teacher Is Running Out Of Time To Save Her 4-Month-Old Baby, Who Is Suffering From A Severe Heart Disease

“He needs surgery next month and I’m just praying to God that he can get the surgery and be safe. These are very difficult times and I can’t stop worrying about him.” – Preema, Lanston’s mother.

4-month-old baby, Lanston is finding it hard to breathe and has congenital heart disease. Untreated, this birth defect could be fatal very quickly. Only a heart surgery can save him. His parents have exhausted all they had and now have no means left to save him.

Lanston is very active and playful

At first glance, Lanston looks like a completely normal child. He plays and interacts with everyone and smiles a lot too. Adored by all, it would seem that there is nothing wrong with him. The only thing that even hints at an illness is his rapid breathing. Lanston's body does not get enough oxygen no matter how much air he keeps trying to pull in.


“If you look at him, he looks completely normal. After a chronic cough - the doctor told us that his breathing was laboured. He used to breathe very rapidly. It’s hard to believe that he is so critical at such a young age.” – Lancy, Laston’s father.

Within the first 90 days from birth, after a sustained cold and cough forced Lancy and Preema to get a 2D echo test done on their baby, they were completely shaken on learning that Lanston was born with severe heart defects.

Lanston has severe congenital heart disease. His body is unable to get the required oxygen which is why he's breathing rapidly most of the time. If untreated, this could prove to be fatal within a few years, putting him at a risk of heart failure. Lanston’s condition will worsen due to severe breathing difficulties unless he’s treated immediately.

Lanston needs a heart surgery as soon as possible

To prevent fatal circumstances in the next few years, Lanston needs a corrective open-heart surgery as soon as possible. Lancy and Preema were told that they need to get it done within a month but now they don’t have any resources left to save their son.


“We have spent all our savings. It’s very difficult for us to now arrange for such a large sum of money but Lanston needs the surgery anyhow. I just want him to have a normal childhood.” – Preema, Lanston’s mother.

Lancy and Preema are running out of time to save Lanston

With just a month left, Lancy and Preema are in dire need of help to save their 4-month-old son. Lancy worked at a shipping yard in Dubai and worked hard, long hours to save up for his wife and child. But given how difficult Preema's pregnancy was, Lancy had to leave his job and come back to care for her. Since then, he has not been able to find another jobs, especially now because Lanston is so critical.

Preema, on the other hand, is a teacher at a small school and earns very little to save anything. Together, they have absolutely nothing left that would provide for the open-heart surgery Lanston needs. Till now, they have spent their savings on Lanston’s treatment. Their parents are retired and don’t work anymore too.

The total cost of the corrective open-heart surgery is estimated to be around Rs. 1.75 lakhs. Lancy and Preema cannot afford this and have no option but resort to crowdfunding. They need our support to save their baby from fatal circumstances.

Lanston is just a 4-month-old baby and is suffering from a congenital heart disease causing severe breathing problems. His only hope of survival is an open-heart surgery. His parents are running out of time to arrange the funds and now, need your help to make this possible.

Your support and contribution will save Lanston’s life. 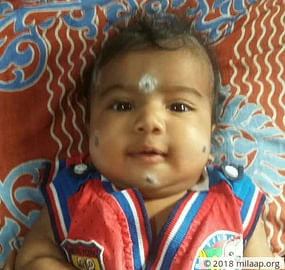 Lanston has severe congenital heart disease and his parents are running out of time to save him.