You are sending a message to
Sravanthi Chilupuru
Go back

Shares
Shares
Share on whatsapp
“For the last couple of years, we have been struggling to arrange money for my father's transplant. We had to keep postponing the transplant even after selling our land. But now, we cannot delay it anymore. He has come to a stage where without a transplant, he will simply die", says the 18-year-old daughter, Nikita.
41-year-old Kumara Swamy has been diagnosed with Liver disease Decompensated Cirrhosis. He is battling the end-stage liver disease and requires an immediate liver transplantation as a life-saving measure.

A fever when turned into a liver disease, we could not sink in the news

Kumara belongs to a small village in Warangal. Being the sole earning member, he struggles hard to take care of everyone. He works in a petrol pump and earns a minimum of 5000 monthly for a 5 member family. The family had been struggling to meet both ends but when Kumara was diagnosed with liver disease, the struggle almost increased by multiple times.

How did it all begin

One day, 3 years back, Kumara was suffering from high fever. He became unconscious in the petrol pump. He was taken to the local doctor, who prescribed medicines. But Kumara did not show signs of improvement. He felt fatigue all the time. It felt like as if the fever did not want to leave his body. After a couple of days, when the situation became critical, he was taken to the hospital.
Understanding the complexity of the situation, Kumara was immediately admitted to the hospital. After series of tests, the doctors had advised for a liver transplant. “It started with the only fever. And he had no other symptoms. But all of a sudden when the doctors spoke about transplant, I was shocked. I could not imagine that my husband was suffering from this”, says his wife.

He Was Unable To Undergo The Surgery Three Years Ago

Kumara was advised to undergo the transplant 3 years back. The cost was almost 20 lakhs and could not arrange for the same. All his family members supported him financially in whatever ways they could. This family has sold their agricultural land in Warangal to arrange for Kumara’s expenses, however, due to lack of funds, the transplant was postponed.

It was routine for him to visit the hospital almost every day last year. He was there over 40 times in six months. Every month he needs a thorough checkup. Whenever his condition worsened, Kumara had to be admitted to the hospital for weeks.
It has almost been a never-ending battle for him.

But now the situation had gone beyond control. Kumara needs to undergo an immediate liver transplant at the earliest. Currently, he hanging in between life and death.

Kumara does not go to work anymore. For the last three years, the family has been battling hard to arrange money for the expenses. He has an 18-year-old daughter studying in school, while his son is studying engineering.

Kumara was the sole bread earner of the family. Nobody had any clue that their life would take a drastic turn.

Your contribution can save his life, and help his family. 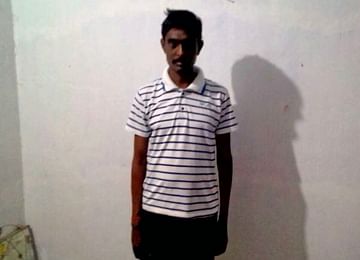 Help Kumara Swamy Fight Cirrhosis And Live For His Family

This 41-year-old dad is suffering from end-stage liver disease; transplant is his only ray of hope.