This Single Father Is Struggling to Save His Son From A Deadly Disease | Milaap
loans added to your basket
Total : 0
Pay Now

Km
You are sending a message to
Kiran moitra
Go back

“Kuldeep is a nice kid, he’s very well behaved and smart. It is terrible to see such a nice person suffering this much.”

Kuldeep Diwakar is a 12-year-old whose life took a turn for the worse during the summer vacations this year. While the other children went back to school and started the school year, Kuldeep’s father Komal Diwakar, was withdrawing him Kuldeep from school, because he was too sick to continue. He has a blood disorder called Severe Aplastic Anemia and his body has stopped making new blood cells. A bone-marrow transplant is the only way out.


Kuldeep with his father and younger brother Bharat

What they thought to be a simple fever, turned into the worst nightmare of their life

Kuldeep lives in Bilaspur with his father Komal and younger brother Bharat. Kuldeep developed a high fever that just didn’t go away despite medication in the summer. He also got chicken pox and his father admitted him to the hospital because his condition was so bad. It was not that blood tests would reveal what was really wrong with him. Kuldeep had severe Aplastic Anemia - a rare, chronic form of anemia that is fatal to life.

Doctors and Bilaspur and Raipur referred him to Vellore, where he’s currently receiving treatment from. Bharat, his 7-year-old brother has been tested and identified as a donor for Kuldeep.


Kuldeep's younger brother Bharat is the donor for Kuldeep

“He is always sick. Sometimes it’s high fevers, sometimes cold and cough. He can barely eat or drink and keeps getting tired all the time.”

Unlike other 12-year-old children, Kuldeep can't play outside or go to school, since all activity wears him out. All he can do is, sit in a corner of his home and wait for his younger brother to be home so he has some company. Easily fatigued and almost always sick, Kuldeep never gets to enjoy his life like other children of his age.

Kuldeep’s father Komal has already seen his fair share of tragedy when he lost his wife to kidney failure, a few years ago. A single father of two sons, he’s been working day and night to make ends meet for his family. He drives an auto-rickshaw for a living and does his best to provide a happy life to his sons.


Kuldeep sitting in his father's autorickshaw

When Komal’s wife, Krishna, fell ill with kidney failure, Komal sold off his tiny patch of land to pay for her treatment. Not just that, he also mortgaged the only source of his income, his auto-rickshaw to arrange for the funds. Krishna was on dialysis for 3 years, which is an expensive affair. Despite all his efforts, she passed away.

“First my wife, now Kuldeep. Misfortune seems to be hunting us down and we have no means to fight it.”

Komal has been an auto-rickshaw driver for school children, for more than 20 years now.  His clients consider him to be very trustworthy and have supported him in his time of need. But when it comes to expensive medical treatment and procedures, there’s only so much one can do. Let Komal’s bleak financial situation not claim his young son’s life. Contribute and give Kuldeep a fair second chance at life. 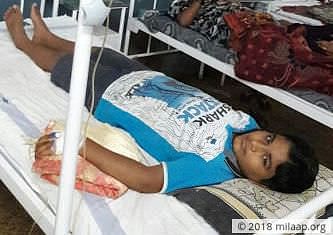 Kuldeep is fighting against a severe blood disorder