This 16-Year-Old Will Become Paralysed And Even Lose His Life Without Urgent Treatment | Milaap
loans added to your basket
Total : 0
Pay Now

“The days when he had no school, my 16-year-old son would bring me lunch at work regularly. On such a day, Krishnendu was supposed to bring my lunch. I got worried when he didn’t come even by afternoon. When I got home, I saw my wife, Bandana crying. My son’s legs had lost senses, he had become motionless. I didn’t know what to do,” Biswanath, Krishnendu’s father.

Krishnendu was his parents' only hope. Biswanath and Bandana had tried to fight poverty and give him happiness. Krishnendu never suffered from any major illness all these years too. He was a very healthy child. His strong will and positive approach towards life were incomparable until cancer took over him.

“When we managed to take him to the doctors,we couldn't believe what we saw in the reports. The day before, my son had complained of neck pain. We were told that the neck pain was because of a tumor at beginning of his spinal cord. A few tests later, we found that it was a cancerous tumor. I couldn’t understand what were we being punished for.”

Even after a surgery, Krishnendu can lose his life without proper treatment

Right after Krishnendu was diagnosed with a tumor in his neck, he needed an operation to remove the tumor. Without the surgery, he would probably have not survived even for a few weeks. But he is still not out of danger because he has Ewing's sarcoma, a dangerous form of cancer. If not treated properly, this cancer can spread to every part of his body and kill him.

“He used to cycle to school. Now he cannot even walk properly, let alone walk. He already underwent 28 cycles of radiotherapy. He has to undergo intensive chemotherapy to survive now. I don’t even know how he endures so much pain. Not only he can become paralyzed for life, but can even lose his life.”

The parents can’t work now, they are forced to beg and borrow even for a meal

Krishnendu has to undergo chemotherapy every 15 days. The family has to travel almost 70 kms to go to the hospital. Krishnendu is very weak and can catch infections very easily. Biswanath has to hire a car to take him there and it costs him a huge sum, which is beyond his reach now.

It’s almost impossible for Biswanath to save his son now, let alone afford his education

Krishnendu wants to become an engineer when he grows up. Biswanath knew it is very difficult, but he was still trying very hard to fulfill his son’s dreams. But with cancer taking over their lives, it is impossible to do that ever.

“Everyone in the family is very upset and nobody seems to speak much. Krishnendu often becomes very sad. He doesn’t ask many questions because he understands everything so well. Every day seems to bring a little more suffering with it. But after coming such a long way I can’t give up hope and let my son die.”

Krishnendu needs intensive chemotherapy to stay alive. His father has spent Rs 5 lakhs so far by borrowing from everyone. He no longer has anyone to turn for help. He needs another Rs 3.5 lakhs to keep his son alive.

Your support will help this teenager live again. 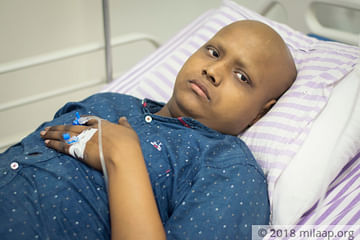 Without help, this 16-year-old will lose his life to cancer

Krishnendu is suffering from a dangerous form of cancer. He needs help to be able to walk and live.