Rakesh Keeps Asking His Mother What Happened To Him But Forgets Everything Due To His Brain Injury | Milaap
loans added to your basket
Total : 0
Pay Now

DK
You are sending a message to
Dilip Kumar
Go back

"Earlier, I used to keep badgering him to stop playing cricket and prepare for his important class 12 exams. Now, even when I take him to the ground - he remembers nothing."

17-year-old Rakesh dreamt of becoming a cricketer. An active and brilliant teen, he can hardly remember anything now. He does not know what happened to him and he feels completely lost. A road accident that has killed two of his close friends and caused him severe brain injury has made his life topsy-turvy, leaving his family in despair.

Two of his friends died on the spot, he had brain injury and multiple fractures

On that unfortunate day, Oct 20, 2017, Rakesh was on his way back home from a friend's house in a car with four of his friends. A speeding car came in an opposite direction and hit them. Two of his friends died on the spot and the rest were admitted to the hospital with severe injuries.

In a few hours, his mother Nirmala got a call from the hospital and heard the worst news a mother can ever hear. She refused to believe it. She rushed hysterically to the hospital hoping it was false news. She was devastated to see her son lying unconscious, and bleeding everywhere with multiple fractures.

" I don't know how I survived that moment, I almost died seeing him in that condition. I spoke to him a few hours before, he said he'll get home in few minutes but he didn't. I'm still waiting for him! I want my son back, I want him to live a normal life." - Nirmala.

Two major surgeries were done to remove a clot in his brain and a minor surgery was done in the left hand to remove glass pieces. After 3 months in the hospital, he is discharged but the pain and trauma continues. Rakesh does not remember anything about the accident. He is able to recognize people but has very poor memory, he forgets what he had spoken and heard within few minutes. He is able to walk straight but can't bend his knees.

Rakesh with his father

Rakesh doesn't remember what happened to him

"He had asked me at least 1,000 times what happened to him, I can't bring myself to tell him. And what will I tell him if he asks about his friends? He has not asked about them till now! He thinks his hair had fallen due to illness and he has been in the hospital for some months. Suddenly he starts crying, or gets irritated with everything around him. I don't know how he'll take it when his memories come back." - Nirmala

Rakesh gets physiotherapy and speech therapy to help him recover. Nirmala is worried about his mental health. She cannot understand what is running in his mind. She refuses to move from him. Unfortunately, Rakesh is dependent on his mother even for basic needs like using the toilet. His mother changes the diaper every day. He has lost the sensation of passing urine and stool.

Nirmala is taking care of all his basic needs

"We had a male staff or a month, he used to take care of him but we were not able to afford it. I'm changing the diapers for him, I can't describe how traumatizing it is. I'm willing to do anything for him but I'm worried what it will do for him. He talks normally but he forgets soon. He is not willing to meet or talk to anyone. I want him to understand that I'm there for him and I'll not let him down at any cost. I don't know if he can understand that." - Nirmala

His father Jaya Prakash works as an auto driver

Nirmala is a homemaker and her husband Jaya Prakash is an auto driver. He earns a very meagre income. Nirmala has a daughter who is married and another son who is in his final year diploma. Nirmala is all alone in the struggle to care for Rakesh. She has hardly slept or eaten, and has no time for herself. She has not stepped out of the house in the last 5 months. Her world is filled with uncertainty, fears, darkness and pain. She is desperate to see a light at the end of the tunnel.

Rakesh was very passionate about cricket, he was exceptionally good at it and was serious about it.  His dream was to join a professional coaching centre but his family couldn't afford it. His mother promised that after completing 12th grade she'd make it happen. Nirmala used to tell him not to go to playground often and to focus on his studies but now she is taking him to the playground every day with a hope that he'll show interest. Nirmala is waiting every minute for a miracle to happen but she knows that she cannot even afford to dream of it without having enough money for the treatment.

Rakesh needs integrated care for speech, movements in legs and hands, to regain his memory. He also needs counselling for his mental health. It is a long journey and he cannot make it without your support. Nirmala is struggling to give another life to her son. She needs Rs 15 lakhs for the treatment. She has already borrowed heavily and neck deep in debts. She has exhausted all her sources. Your contribution can help Rakesh live a normal life.

Your contribution can make it possible for Rakesh to have a second life! 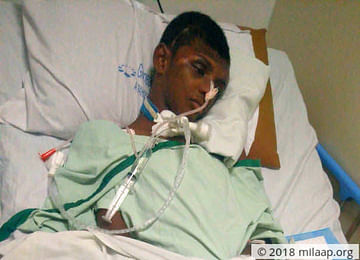 He needs integrated treatment for at least 1 year. His mother is struggling to save him.