You are sending a message to
Aneeta Thomas
Go back

Shares
Shares
Share on whatsapp
3-year-old Abel doesn't know why his mother is not feeding him and putting him to sleep. When he tries to hug her, she pushes him away. Tears fill his eyes and he runs to his father. Josephine had an accident that has injured her brain. She no longer seems to have any memory of herself and her family. The doctors have given hope that she will get better if not for a surgery in the skull to prevent infections in her brain. But her husband is struggling to arrange for funds.

Life changed drastically for the family after Josephine's surgery

Josephine's 3-year-old son Abel is very confused. His mother – the one who took care of him all his life – now simply ignores him and pinches him when he comes close. He tries to sit on her lap but she pushes him away and never says anything to him. His sister has been sent away to his aunt's house and his father looks very worried all the time.

The accident on March 16 changed Abel and his sister, Anna's life forever. Josephine was returning home from her mother's house on her scooter when she was hit by another vehicle. The police found her on the road, took her to the hospital and informed the family. Josephine was three months pregnant at the time.

Josephine gave birth to her baby which died in eight days. But the worst of it is that of all that happened, Josephine remembers nothing. When she finally came to, she didn't recognise anyone. She has difficulty speaking and only manages to mumble unintelligibly. She has violent outbursts and for her caretakers' and her own safety is kept tied to the bed.

Her husband Antony is distraught. “I am a driver, and accidents are a reality I live with. But this accident shifted the ground from under me. At first I was thankful that she was hurt only on the head. Only now I see how it has affected and changed her. She doesn't recognise any one and sometimes lashes out at the children,” he explains.

While what hurts him the most is his innocent children's shock at their mother's apathy and aggression – Antony has worked himself in heavy debts trying to save Josephine. He has already spent over Rs 30 lakhs on treatment – liquidating all their savings and gold. It was money he saved working long hours in the Middle East for his children's education.

Josephine is showing some signs of improvement. She was in a coma when her baby was born, but now she is awake and able to move. Sometimes, she even smiles at the children and the sun comes out from behind despair. She even talks when she feels calm and responds when called. But it is very clear to her family that she does not recognise them.

Now that she is somewhat stable, the doctors have recommended a cranioplasty – or a reconstruction of her skull that will protect her from further injury and infections. They believe that the surgery will also bring down her violent outbursts and calm her. But by now, Antony is a broken man, emotionally and financially spent.

Antony cannot afford a hospital anymore, so he brought Josephine home and kept a nurse to care for her. Even now, he has to work and earn to put food on the table for his family. Also, he makes sure Josephine gets all the medicines she needs – though they are expensive. Her check-ups alone cost a

Antony cannot imagine a life without Josephine and their two young children need their mother. If we could come together and support this family, these two little children will get their mother back. Funds raised through this fundraiser will support Josephine's surgery and will help her recover. 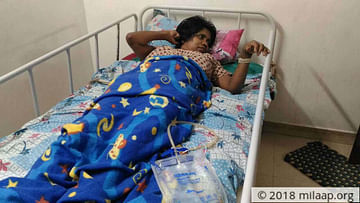 Help Josephine get a brain surgery

Her brain injury has made her violent and amnesic. Josephine needs a surgery to survive her accident