With A Salary Of Rs.300, This Father Struggles To Save His Baby Daughter From Cancer | Milaap

With A Salary Of Rs.300, This Father Struggles To Save His Baby Daughter From Cancer

Shares
Shares
Share on whatsapp
It was late at night. Yovaraj and his wife,Sutha, were seated in a corner of their small room. There were few 100 rupee and 500 rupee notes on the floor. YovanRaj counted the notes again and again. Sutha was emptying her purse and new envelopes lying on the floor next to her.  Finally,they had gathered all money that was there with them. It was just 30,000 rupees. Sutha looked at her husband who was staring at the money in his hand. They have to pay much more the next day at the hospital. Suddenly, their thoughts were broken with the faint cries from the other room. Sutha hurried towards the room. She went and picked up her baby.  The cries stopped the moment Jessy saw her mother's face. Sutha brought her to the room outside. Her husband was still counting. She couldn't control her tears. Seeing Sutha crying, Yovaraj quickly put the money in the purse and came towards her. "We will find a way", he consoled her and picked up Jessy.
Jessy is just 9 months old. It was only two months ago that Yovanraj and Sutha came to know that their baby is suffering from blood cancer. A supervisor in a small lodge, Yovanraj just earns just Rs.300 a day which gets cut if he does not show up at work. Now, the couple has no money left to pay for the treatment and Jessy's treatment is at stake.

Little Jessy Has Been On Painful Chemotherapy To Fight Her Cancer

Jessy is undergoing treatment in Meenakshi Mission Hospital, Madurai. She goes home after few days of admission and gets back to the hospital when her blood counts drop. Her mother Sutha, stays with her in the hospital. More than, the difficulties in managing the treatment expenses, what worries Sutha is the thought her little daughter can't even express her pain. For adults there are counselling sessions to cope cancer and pain. In what way can we teach a 9-month-old to cope with cancer. "Sometimes, I think why my daughter should undergo this pain. But then I realise that everyone born in this world has the right to live and as Jessy's mother, I should fight to keep my daughter alive

They Managed Till Now With The Generosity of Their Relatives.

After exhausting whatever they had, the couple asked their relatives for help. With their help, they managed to pay for the treatment. Now, even the relatives have no option left to help them. The estimation given for chemotherapy for the next few months is Rs.6 lakhs. This will be followed by regular checkups.

A Father's Plea To Save His Daughter

"I feel bad that I cannot be with her. She has to take care of Jessy alone and I am always worried that she will break down seeing Jessy undergoing chemotherapy. But I have no other option. If I go one day, I can get Rs.400 and pay for their travel to the hospital atleast". As a last option, Yovanraj reaches out to people who can help him.

How We Can Help

Our support can help this father continue his daughter's treatment. This is his last chance and his hope to save his daughter. Funds raised through this campaign will be utilised to help Jessy undergo chemotherapy and recover from cancer. Let's join hands to help this little one fight cancer. 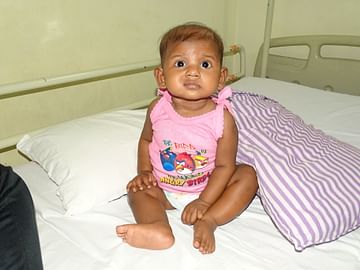 Save 9-month-old Jessy from blood cancer

This little one is on intense chemotherapy to fight blood cancer. Her family does not have money...