“Before we knew it, my son was lying on the death bed. We never thought he could make it out alive. In our financial condition, we hardly look for light because we cannot afford the price of oil."

33-year-old Jayachandran was diagnosed with a Hepatitis-B-virus related chronic liver disease. His weak economic background prevented him from seeking medical intervention until a liver transplant was the only chance for his survival.

How did it begin?

“My son first complained of severe stomach pain back in 2014. We didn’t know it was so serious. It turned out that he had jaundice. We took him to the doctor a while later when it became unbearable."

"At Ramachandra, he got treatment. We could not afford the medical expenses, and we felt he was not getting better either for over a year. So we turned to Naturopathy."

"Few months later, Jayachandran got worse. We had to go back to the hospital. We tried several hospitals like Global and Apollo. We turned back home because they all said his liver was failing and he needed a transplant. That would cost nearly Rs. 26 lakhs. We could not gather that much money in all of our lifetimes put together. So we went back home."

"Soon, there came a time when he would have died without the surgery. We agreed to get the surgery. The transplant is the only way to save my son.”

How are you managing funds for the treatment?

Thankfully, the government approved to fund for the entire transplant surgery through the CM fund. Jayachandran needs to be in a clean and sterile environment before and after transplant.
He has to avoid travel as much as possible, stay close to the hospital, and stay on a strict diet to avoid any kind of infection. This means the family, originally from a small village outside Chennai, needs to include expenses for travel, rent and food as well.
Jayachandran used to work at a private company earning Rs. 9,000 a month before the disease affected his work life. Now, his father, Sundaramoorthy, a farmer/part-time electrician is taking care of the entire family including his wife Komala, daughter-in-law Sushila, granddaughter Dhanalakshmi, and grandson Omesh, on a meager income of Rs. 13,500 during a good harvest season. Since the monsoons have not been so kind this year, this family has been struggling for daily meals.

How can we help?

This family has almost nothing left now. They are living in debt with school-going children. Sushila has completed her BSc. but cannot go to work as she has to care for her ailing husband and young children.

“So far whatever bills we had pending, we paid them off by selling all my wife’s and Sushila’s jewellery from the wedding. We also took a loan from whoever we know. I don’t know how we can come up with more to save our son.”

Medicines and lab investigations for Jayachandran during the first two years post the transplant will cost around Rs. 3,00,000, and after that, he would need Rs. 15,000 a month for treatment. We have calculated a rough estimate of how much this family would need for the entire treatment.
Any contribution will go a long way in helping Jayachandran – a son, husband and father.

The specifics of this case have been verified by the medical team at the concerned hospital. For any clarification on the treatment or associated costs, contact the campaign organiser or the medical team.
Click here for details on donors or to make your contribution towards Jayachandran.
Donate 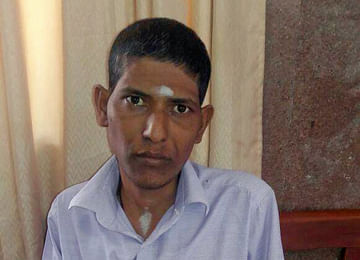 He had Chronic Liver Disease, and couldn't afford treatment until he had no choice.

UPI: givetojayachandrn11@yesbankltd (Copy to clipboard)
Click here to read the instructions before you make a bank transfer.