Cancer Made My 3 Year-Old Weak, But He Is Ready To Fight It Off. Will You Help Me Save Him? | Milaap
loans added to your basket
Total : 0
Pay Now

Cancer Made My 3 Year-Old Weak, But He Is Ready To Fight It Off. Will You Help Me Save Him?

Shares
Shares
Share on whatsapp
The festival of lights, Diwali, is always a grand occasion in our home. Relatives, friends and family get together to feast and be merry. But last Diwali was more about darkness for them as even before the celebrations were over, 3 year-old Ishan, the youngest member of the family, was down with a fever that turned out to be cancer.

A fever that drained all his energy

“We knew from the beginning that this was not a normal fever because Ishan behaved differently; he looked really weak. He was also vomiting a lot and had loose motions. My vivacious son, who filled any room with his charm, had become dull. In just a few hours. When we took him to the doctor first, they said it was nothing to worry about and gave us medicines. But the fever persisted and we had to get him admitted twice in two weeks,” says Sandeep, his father.

The next few days were extremely trying for the entire family. Ishan had become pale and famished. He lost interest in playing and eating food. Most importantly, he had started complaining of joint pain. That was when Sandeep realized that something had to be done – he sensed that his son’s health was depleting and was determined to do anything to find out why.

He, along with his wife and son, travelled all the way to West Bengal from their small town in Bihar. It was at a hospital in West Bengal that Sandeep found out that his son’s haemoglobin count was very low.


“A blood transfusion was done immediately. We were very scared. We knew something was wrong but never imagined that it would be something so serious. Our Ishan, who absolutely hates hospitals, had tubes injected in his veins. His pleading and cries of pain haunt me even now. It is not easy for a father to helplessly watch his child suffer,” shares Sandeep.

Ishan is too small to fight such a big disease, but he's smiling through the pain

What really broke Sandeep’s heart was when the doctors advised that Ishan undergo a bone marrow test. He knew in his heart that something awful was looming large over his only child and he had to do something about it. The family then travelled to Bengaluru where Sandeep’s worst fears were confirmed: Ishan had acute blood cancer.


“He was started on chemotherapy immediately. There was no time to waste. We could not take any chances. I knew in my mind that we cannot bear the costs of treatment, but we went ahead with it. He is my only child and I love him more than anything in the world,” he says, adding that, “Ishan has been undergoing chemotherapy for the last two months. He looks frail, has lost all his hair, but there is something that remains constant: the smile on his face. “Nobody can wipe that cheerful smile off his face. Not you, not me, not even cancer. My child is a warrior and I am sure he will beat cancer.”

Ishan needs prolonged chemotherapy to fight blood cancer. His father, Sandeep, who owns a small shop in Bihar has already spent more than Rs 2 lakh on his treatment so far. Since the entire family (including Ishan’s grandparents) had to relocate temporarily to Bengaluru, his business has not been doing too well. Sandeep is certain that he cannot afford money required for Ishan’s ongoing treatment. You can help this father save his only son. 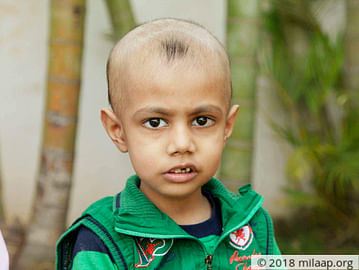 Ishan is suffering from a severe form of blood cancer for which the only treatment is chemotherapy.